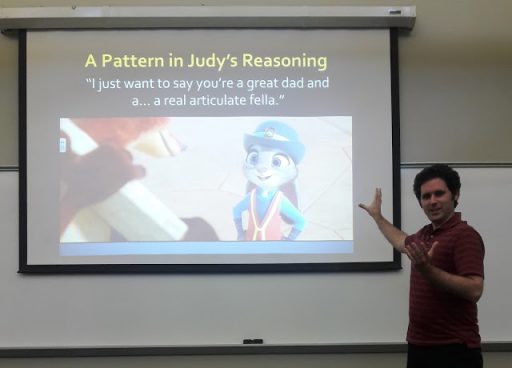 Educating Undergraduates about 2016’s Best Film
It’s been just over a year since Andy shared a draft of “Moral Psychology and Prejudice in Disney’s Zootopia” and wrote about how I was using Zootopia in one of my applied ethics courses. If that doesn’t found familiar to you, let me offer a short recap.

Back then, I was teaching philosophy at the University of Tennessee while finishing my PhD there, and I used Zootopia in two applied ethics courses to introduce the moral and psychological aspects of bias to my students. In the time that has passed, I’ve finished that degree and jumped to a different institution (I’m at the University of South Florida as a postdoctoral researcher right now).

I’ve also learned a few things from the feedback I received on the old draft and from my presentations of the material in different venues. In light of those developments, it seems appropriate to provide a little more material on Zootopia for your perusal.

Check it out after the break.

Before proceeding, I should add that I am not currently looking to make any revisions to these items. You’re still welcome to send me feedback – comment below or send me an email at [email protected] – but there are no immediate plans for making large alterations to this material. With that in mind, here are a few things I have used in the classroom to teach about Zootopia:

Now before I sign off, I should address something important. Having discussed Zootopia with plenty of other people over the last year and gained some perspective from subsequent viewings of the film, I have a lot more to say about its subject matter than what’s presented in these materials. For instance, I took some heat from readers of the original paper (including from some of my students) because I criticized Nick’s moral character, but I haven’t been persuaded to change my view about him. Unfortunately, it didn’t seem appropriate to go on a lengthy tangent about that subject in the paper itself, so readers have to settle for a footnote.

The good news is that since I now have a staff position here at ZNN, I can explore some of these ideas at greater length than I have in the past. And what better place to start than subjecting Nick Wilde’s actions and character to a little philosophical scrutiny? Is it fair to say that he’s morally good at the end of the film, despite his shady past? I’ll tackle that question next month. See you then.