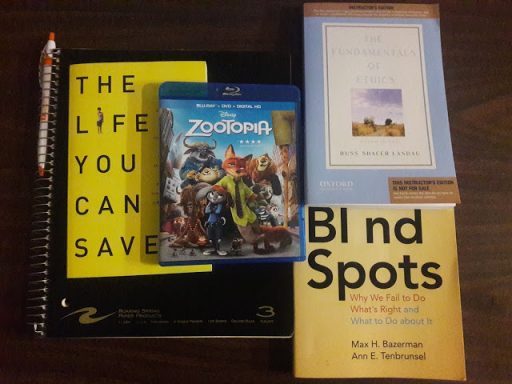 Did you ever think that you would see Zootopia as a required part of a university course?  I mean, it deserves to be studied by every film student, but I’m talking outside of media arts class.  I’m talking…  Ethics.

Meet Trevor Hedberg, a graduate student in the Philosophy department at the University of Tennessee.  He is currently teaching a course called Contemporary Moral Problems, with a unit on the topic of how various psychological phenomena can cause us to unwittingly act unethically.  As a part of this course, he is screening Zootopia for his students as an introduction to their textbooks on the subject of implicit bias (as seen above).

As a part of his job, he’s put together a relatively short paper titled “Moral Psychology and Prejudice in Disney’s Zootopia“.  This paper gives a brief explanation of the deeper issues at play in the movie, demonstrating how its message is not a direct allegory to any one race, gender, sexuality, etc., but how it serves as a lesson in recognizing and overcoming prejudice in all forms, regardless of the specific circumstances.  It goes beyond just a simple “Racism is bad!” message, and tackles the hard questions of implicit bias and how it affects decisions made by people who are fundamentally good.

You can read his paper here.  Not only is it fascinating in its current state, but he has opened it up to critique from the fandom at large.  That’s right, he wants to hear what YOU have to say about his paper!  As he put it, “They are probably in a better position to critique it than most of my peers in academic philosophy, who have probably only seen the film once or twice.”

The goal here is to point out details in the film that a casual observer might not notice, which tie in to understanding implicit bias.  For example, the scene at Jerry Jumbeaux Jr’s Ice Cream Parlor is riddled with Microagressions, both from Jerry the elephant AND from Judy herself- and she didn’t even realize!

So, if you’ve read the paper and think there was something important that he left out, or otherwise missed, leave a comment down below!