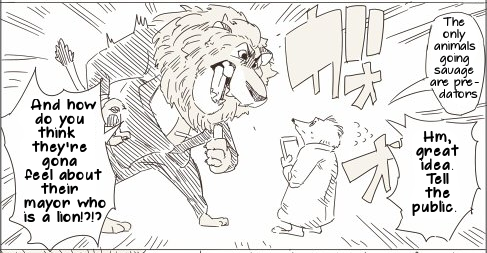 Now I want to see the entire movie re-drawn as a manga.  That would be seriously awesome.

So, here’s a re-imagining of the scene at the Cliffside Asylum, where Judy’s parents call at the absolute worst possible moment and they have to escape as fast as they can.  This one I can’t exactly see “happening” per say, but people do tend to act in unpredictable ways in high-stress situations.  Either way, it’s hilarious!

Thanks to 櫻井エネルギー (@Sakurai_Energy) for drawing the original comic, and thanks to LMAbacus for the translation and gfcwfzkm for editing it.  As usual with manga, read it from left to right.

Find the original over on twitter, and the translated version after the break!