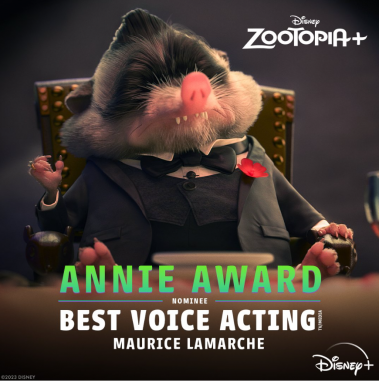 Hey, one and all! Hope you’re ready for some more award news! Yeah, I know, we just covered this not that long ago, but still, Zootopia+ has managed to rack up another award nomination, this time from the ANNIE’s!

Maurice LaMarche has been nominated for Best Voice Acting thanks to his portrayal of Mr. Big in Zootopia+. Can’t say I’m surprised given his chilling performance in “The Godfather of the Bride.”

You can check out the post below or over on Twitter for more details. Or you can go to the Annie Awards site for even more details about the process and who Tundratown’s most notorious crime boss will be up against.  Here’s to hoping he manages to ice the competition and come out on top with the award.