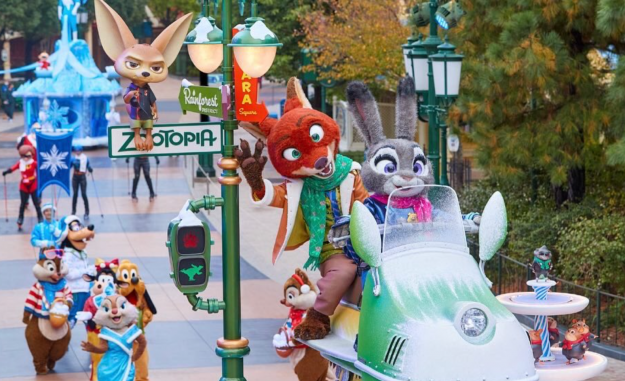 Can’t you almost feel the rush of arctic air on your nose while looking at Nick and Judy on a Snowmobile?

In Zootopia, one never has to travel far if they’re looking to spend a day having some winter fun; it’s always snowy in the Tundratown district! We may have to travel a bit further to get a glimpse of their joyride, however. Still, it seems that our favorite fox and bunny, along with some other familiar faces are being included in a wintery seasonal event at Shanghai Disneyland going on from now until February 19th.

Have a look at this post from Disney Magical Kingdom Blog and watch the attached “trailer” for Shanghai Disneyland’s Disney Winter Magic Cavalcade!

🎄☃️ #ShanghaiDisneyResort announced today the launch of the “#DisneyWinterFrostival”, this year’s new and much-anticipated seasonal celebration set to start next Monday, Nov 28, 2022 with the debut of the #DisneyWinterMagicCavalcade in #ShanghaiDisneyland.#Disney #DisneyParks pic.twitter.com/zXfzqprhTL