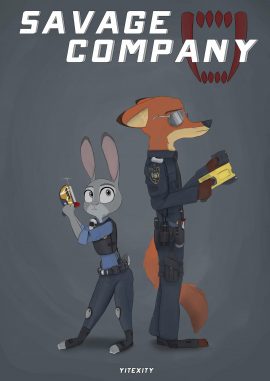 Hello viewers, it’s time for another feature! This time we’ll be revisiting an old classic, I’m talking about none other than Savage Company! It’s been a while since we first covered this series and a lot has changed since then. Heck, we even covered an animated take on the series a few years back. With everything that’s happened since then, though, we thought it only fair to go back and take another look for those to help old viewers catch up along with new viewers who might’ve missed it the first time.

For those of you not in the know, Savage Company is a long-running comic series by Yitexity. One that will take Zootopia’s greatest cop and bunny duo crazy journey with plenty of great characters and an intriguing mystery to unravel. Oh, and there’s also some romance for all you WildeHopps shippers, can’t skimp on that adorable coupling now, can we? This series has been going since 2016 and it’s just reached its seventh chapter now, each of which has more than its fair share of pages to read through. So needless to say, there’s quite a lot of story and quality art to peruse.

Be aware that there are some pretty mature themes in the story so I wouldn’t recommend it for younger or sensitive readers. Regardless, if you’re looking for an amazing cop drama series with great characters and a lot of bang for your buck, then you’ll want to give this series a look. Check it out in the links below and let us know what you think.