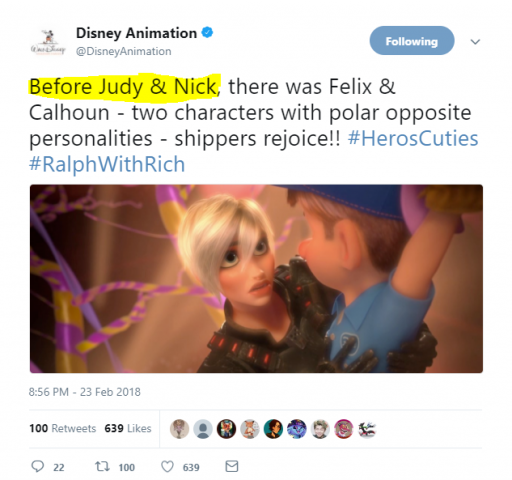 Rich Moore is one sly son of a gun, isn’t he?  Wreck-it-Ralph messed with a lot of Disney conventions, including having SIDE characters (if you can call them that) getting married, with no romantic focus involved in the main character’s story whatsoever.  But there are some pairings in Disney that are too good to ignore, like a certain fox and bunny.

This tweet, which hints at there being something… more… between Nick and Judy, came to us from a live-tweeting event where Rich Moore was briefly given control of the @DisneyAnimation twitter account while Wreck It Ralph played on ABC.  Of course, being the notorious WildeHopps shipper he is, he couldn’t let this chance to tease us pass, could he?

Side note- Rich may be one of the directors of Zootopia, but that doesn’t necessarily mean WildeHopps is considered Canon.  Canon is just the movie, not anything outside of it.  However, Disney has been dropping hints about it left, right, and center for the past two years so… take that as you will.


You can see the rest of the live-tweeting over on twitter by searching for the hashtag #RalphWithRich, and react to/retweet the original post after the break!