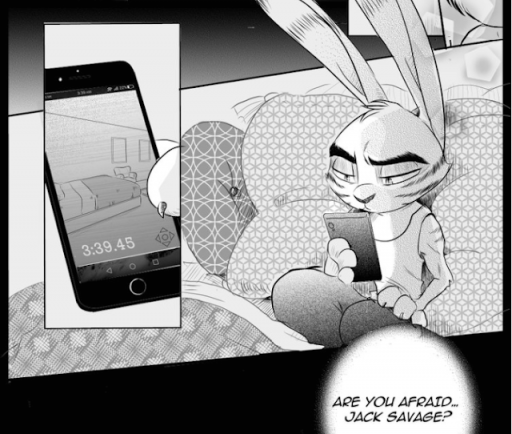 Welcome back to Black Jack, to the chapter I’ll call “Judy is Mad”.  Because according to this fandom, there’s one way to get Judy hopping mad (that joke was awful so I won’t bother saying sorry, I know you won’t forgive me).  And that way is to discredit Nick in front of her.  After all, they’ve been partners for most of her tenure as a police officer, and they’ve saved each other’s lives on multiple occasions, and they trust each other implicitly.  To have him be discounted for apparently no good reason (even though we saw in the last chapter that Jack actually does have one), is one of the quickest ways to get Judy upset.
Meanwhile, something else is going on in Jack’s life.  What does this have to do with the mission he’s recruiting the best agents on the ZPD for?  That’s something that will have to come later.  But for now, Kudos to Rem289 and AoiMotion for even more spectacular writing and artwork!
Check out the rest of the comic over on Tumblr or Deviantart, and read Chapter 6: Suspect, after the break!