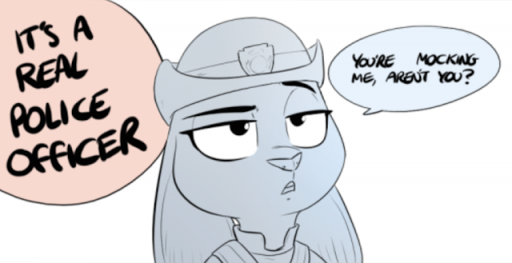 There are two ways you can imagine the voices in this comic.  First, you can imagine it with Nick and Judy as played by Jason Bateman and Ginnifer Goodwin.  This would totally be in-character for them, after all.
But then there’s the fun way.  The way where you imagine it in the voices of Tom Hanks and Tim Allen.  Here, we’ll even give you a demonstration.  (It just gets better and better the longer it goes, doesn’t it?)
This comic has been floating around on imgur for a while, but finding the original source proved tricky.  But, with some determination and luck, we were finally able to find the artist behind it: ShoutingIsFun, aka Concrete Staircase!  Unfortunately we can’t link to their tumblr, as it contains NSFW content, but still, we found it!
Check it out after the break!