For those of you just joining us, ZNN has been covering the ongoing developments of the legal case filed by Esplanade Productions and Gary Goldman against Disney, claiming that they stole his ideas to create Zootopia.  We’ve pointed out several reasons why this is just absurd, from Goldman not filing for a copyright of his “ideas” until a year after Zootopia was first released, the sheer lack of content proving the existence of this concept despite having “worked on it” for almost a decade before production of Zootopia even began, and how he claims copyright of basic character archetypes.

Despite Disney filing a motion to dismiss the case, Esplanade Productions is not giving up.  They have now filed an Opposition to Disney’s motion to Dismiss.  And I’m sorry, but some of the arguments they make is absolutely hysterical (in my opinion).

I’ll discuss why this is one of the most unintentionally funny legal documents I’ve ever read after the break.  However, for now, you should know that a hearing date has been set: June 26th.  At that time, the judge will review the case, and decide if it is substantial enough to hear in court.  You can find the original article on this development in The Hollywood Reporter, and you can read the entire Opposition here.

Read on after the break!

First, they still keep emphasizing that Goldman’s movie was called “Zotoopia”, despite evidence suggesting it was actually called “Looney” and contained a live-action component.  Considering they have yet to produce anything like a script or even a copy of the original pitch… yeah, I’ll believe it when I see it.

Secondly, they identify the people that Goldman claims to have pitched his idea to all those years ago: David Hoberman and Brigham Taylor.  Now, these guys probably are completely innocent in all this.  They likely get hundreds upon hundreds of pitches for movies every year.  And they have produced many excellent movies for Disney.  Sure, they’ve had their flops (Hoberman was a producer on Beverly Hills Chihuahua in 2008) but they’ve also had their hits too (the new, Live-action Beauty and the Beast is Hoberman’s most recent success, and the live-action Jungle Book is Taylor’s).

But as obviously connected to the Walt Disney Company as these two are… there’s no evidence they ever had any influence over Walt Disney Animation Studios, nor is there any evidence that they were on close terms with people who did.  If it had been Michael Eisner or Bob Iger, that would have been a completely different matter, but as far as we can tell, Hoberman and Taylor were not in a position to tell the team at WDAS about this movie pitch they’d heard a decade ago while Zootopia was in production.

However, the funniest part of this opposition is their descriptions of what makes the Goldman story “Highly Original”.  I could go on and on about how ridiculous this is, but I’ll just summarize a few of my favorite points that they claim are unique to Goldman’s story, and are therefore infringing on his rights when they are portrayed in Zootopia.

And that’s just the settings.  They go on to say that schools, male-only rooms where characters are bullied, media venues, and asylums “do not naturally flow from the premise of a modern world of animated anthropomorphic animal characters”.  I’m sorry, but what world are they living in?  These are things that exist in the human world, and if you’re going to set a story in a city like they describe, yeah all of these places are possible!  They’re part of our world, so therefore they are free game to be used in fictional worlds.  Nobody has exclusive rights to use those settings, not even in conjunction with one another.
Also, they try to compare two lines of dialogue from the Goldman script (which they still have yet to produce as evidence, by the way) with lines in Zootopia.  Even though one of these lines is only found in a character description in goldman’s story.  They then claim that nobody else could have come up with the name “Zootopia” before them.
And finally… we come to my absolute favorite part of this mess of an argument.  The part where they describe the similarities between all the different characters, and use that to argue that Disney obviously copied them.  The things they compare are so broad and generic that it’s hilarious to think they’re trying to use them to discredit Disney’s stance that these traits are archetypes, and are therefore unprotectable.
I would just copy/paste the paragraphs in, but Blogger doesn’t seem to like me doing that.  You can find the descriptions on pages 15 – 17 of the opposition.  Read that, then come back to this article, 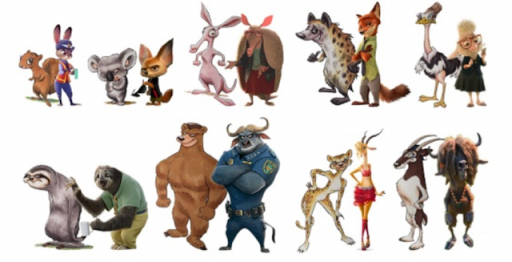 You back?  Good.  As you can see, they are making really absurd claims, like this one: heroes who are underestimated, unappreciated, and not taken seriously because of [insert trait here] is a unique, protectable element of a story.  Pessimistic and optimistic underdogs who team up despite opposing viewpoints is original.  Big, strong, intimidating characters see who see themselves are natural leaders have never been done before, nor have attractive female performers who function as sex symbols.  And finally, the kicker- Yax and Max are similar because… wait for it… they’re horned mammals with similar names.
I’m sorry, Goldman, but if you’re going to claim that Disney “stole your characters” for similarities as flimsy as that, you’re going to have to go through a LOT of other movies to make sure that nobody else uses them.  Take for example, Illumination Entertainment’s “Sing”.
What, are you saying that characters with similar body types or personalities can’t exist without being stolen?  That’s a big claim, with a lot of implications for the entire film industry!  Or even outside of film.  I mean, just look at this!
Should we sue him for infringing on our obviously similar characters?  They all match their supposed “role” in Goldman’s story.  After all, we had made our characters long before he ever revealed his to the world.  He must have stolen the ideas from us.  (/sarcasm)
The point I’m making here is that, whatever respect I might have held for Goldman is now gone.  The things he is claiming to own by virtue of copyright are as broad and ridiculous as the Fine Brothers claiming they owned the word “React”.  If you read this, Gary, I have a bit of advice.  Just stop it.  Now.  Before you become even more of a laughing stock.  Art theft is a serious issue, but you making a stink about what is obviously NOT theft is just going to make you, your company, and your entire past reputation, look bad.
This is Andy Lagopus, hoping that the judge throws this lawsuit out of court immediately after laughing at it.