Hello my fellow fanfic writers! This is DarkFlameWolf, leader of the ZNN Abyss Gazers, here with an interesting new type of article. You see, there are so many tutorials out there for drawing art or making videos, but few really for helping others write.  So, I’ve put this together in the hope that we can all learn from each other and bring even more fantastic fanfiction into this fandom!

The question I see or get asked most is, “How do you plan out your action scenes?” Well, that is an excellent question and that varies from author to author.  However, I’ll give you my particular method of sequence blocking that’s helped me. This is not the only technique out there, but for those struggling to write action set pieces, maybe this will help you better.

For the purposes of this exercise, I will be using the bat chase scene from chapter 10 of my story Death Becomes You, (a fanfic we cannot properly feature or link here due to some of its content) BUT, the action scene contained here is a PERFECT example of the type of sequence blocking I will be discussing. I’ll be editing out most of the gory bits to keep it PG for our readers here.

Without further adieu, check out my tutorial on crafting an action scene after the break!

The Five Stages of an Action Scene

So let’s talk about the five stages of a good action scene. There has to be an inciting incident where the conflict kicks off and the action is set into motion. Once engaged into the scene, we then need to setup the stakes and who the players are and the overall location or dynamics that we will be dealing with throughout the course of the sequence. Then the build-up, which can be a variety of unique scene ‘beats’ that lead up to the climax, which is the pinnacle of the action sequence and involves some sort of major event such as turning the tide in a near hopeless battle, or maybe the death of a character. Either way, you now need to give a resolution as the sequence dies down and we flow into the next story beat that’ll bring some sort of closure to the reader regarding what they have just read.

To start off any action scene you need to have the inciting incident that sets off a series of events that leads directly into the action. For an example, let’s look at the starting moment in chapter 10 of Death Becomes You where Clawhauser unwittingly sets off all the bats to their location:

The tension was already set up earlier in the chapter with them being deep in enemy territory and with potential bats all around them. They are literally surrounded, but are still remaining under the radar due to being silent and secretive with their operations. However, we needed Clawhauser, the lovable, idiot goofball that he is, to be the one to not only prove he’s good with a gun (a later plot point) but also set off in motion the rest of the chapter’s action sequence.

Now that readers know an action scene is underway, we need to setup the rules of the scene. We need to establish the location or articles that the characters will be working with throughout the sequence. We need to ground the reader in expectations of how the scene will play out so that anything added to the base setup will feel like an organic part of the action rather than something tacked on or from left field. As an example:

As we can see, we’ve established who the major players are going to be here: Mai, Jack, Judy, Higgins and Rhinowitz. Clawhauser, Bogo and Swinton are also with the group but they are not being established here as major players in the scene to come. Furthermore we set out the environment which is the van they are in with sliding side car doors. We then establish where each major character is going to be: the three rabbits up top and the two larger officers holding them below inside. Anything added to this setup would only confuse the reader after this point and make the overall flow of the sequence disjointed and lack focus. When you write action scenes, savor the fact that you can have it focus on one specific set piece rather than trying to add a ton of different ideas into it, your scenes will come out all the stronger for it.

Now before we move ahead with the action, you need to plan out overall action ‘beats.’ Individual moments in time where a specific action or sequence of actions being done by one or more characters happen within the overall narrative of the action scene. You want each to be unique enough to stand on their own so no repetition happens as you draw the sequence out longer. My suggestion is no more than 3-5 unique mini-sequences inside the bigger one. Here are some examples:

This first sequence shows off a bit of a ‘hope spot’ for our heroes. One where it seems like they just might make it out of this situation alive. It also demonstrates both Jack and Judy’s capabilities with weapons and their skill at hitting moving targets. It also displays Mai’s amazing acrobatic ninja abilities as well. So this moment serves multiple purposes in conveying information to the reader while progressing the action forward.

The next moment is a small one but it does three things: first it ramps up the danger aspect of the situation, placing Judy in near mortal peril while at the same time disarming her and now effectively putting her out of the fight bringing our heroes down a man. Finally it also displays Judy’s determination to want to get back into the fight regardless of having lost her weapon.

Finally we end the final build-up mini-sequence with a really devastating blow to the heroes position: the entire roof of the car being ripped off leaving them vulnerable and exposed to the bats. With such an enormous amount of bats, they will clearly be overrun and with no roof to protect them, anything smaller than a rhino, hippo, buffalo or cheetah would be carried off easily by two or more bats. So we just ratcheted the level of tension and danger in this scene by ten fold and at this point there is truly nowhere else to go but to the climax.

With the climax in sight, there needs to be some big, momentous event that eclipses all others that came before it and brings a definitive end to the build-up. From here on out after the climax, everything needs to head downhill in terms of action and a resolution needs to be efficiently reached. So this climax should be something memorable and distinctive that readers can immediately tell that this is a turning point in the narrative flow of the scene. 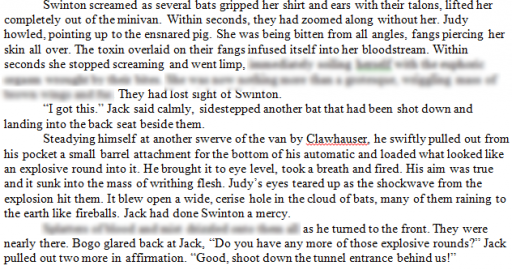 Piggybacking from the final scene of build up, it was established that the bunnies and other small mammals were most vulnerable to the bats carrying them off. We then fulfill this threat by actually having a lesser side-character be the bait and be carried off by the bats. This sudden, brutal death of Swinton comes as a shock to readers at this point since there has not been a single ‘on-page’ death of any character big OR small. I also use this moment to add a few additional lines to lead us into what will become the resolution of our action scene.

We come at last to the wind-down, the conclusion of all the festivities that came before. This is the part where you give the heroes either victory over their opponents or give them a way out of the situation they’re in. Either way, this mini-sequence should wrap up the entire scene and flow readers into the aftermath of dialogue and character interaction regarding what they just experienced.

So we see here that our protagonists are given a way out of this mess by entering a tunnel in the wall and using a plot device earlier in the sequence at the climax, a detonator round, to help seal their escape. Once the scene is over, a paragraph or two can be used to help put the entire scene in perspective as it does here. We hearken back to how Clawhauser started this mess but that all were accepting of their fate going on the mission. We also recap the final price paid in the climax. So we close the loop of the overall impact this particular action sequence will have on the story and what, if any, role it’ll play in propelling character arcs further.

And there it is! This is how I plan out action sequences every time I feel I need to give my stories a little bit of an adrenaline kick! This is not the only way to plan out scenes but this is merely my specific way I like to do things. I prefer sequences that not only propel the action forward with minimal backtracking and repetition but I also like to include character moments and plot devices that will help instigate later character arc development long after the scene has ended. If you can include small narrative devices like that throughout your scenes, your story will be better off for it and the readers will appreciate the amount of time and forethought you put into planning your story.

Whew! I know that was a long read and I thank anyone who stuck with me until the end! Hopefully this helped some of you and know that this method can apply to any type of scene! including…erm…steamy ones…

It’s all about the planning and figuring out ahead of time what your end goal for the scene is going to be and what impact it’ll have on both readers and your characters.  Hope to have been of service, and happy writing to all the authors out there! And if you wish to know anything else about writing or how I do things, feel free to comment below!  If this article does well, we may turn this into a running series on ZNN!