Andy Lagopus here!  We’ve got a special treat for you today- our first Guest post!  Surrika is still our official Meerkat of Merch, but I’m giving them some more time to work on their next article.  In the meantime, TheFonz46 approached me with a review of some of the merchandise he had, and so I’m willing to give him a shot on a one-time guest post.

So, if YOU want to write an article for ZNN, email it to [email protected].  We’ll take a look at it, and if we feel it’s something that would be appropriate to feature, we’ll let you know!  This can be anything from a piece of rare merchandise to a FreezeFrame of something you noticed that we might have missed.  This is an experiment, so if you like these guest posts, be sure to let us know in the comments!

And now, on to our first guest review of two Nick Wilde items- a Funko Mystery Mini, and a rare Disney Parks Cast Member pin!

Thanks for that introduction, Andy!  As he said, I’m TheFonz46.  You may have seen me around the zootopia subreddit, but this is my first attempt at reviewing merchandise like this, so thank you for the opportunity!

First up, we have a Disney Park Cast Member Pin of Nick Wilde. 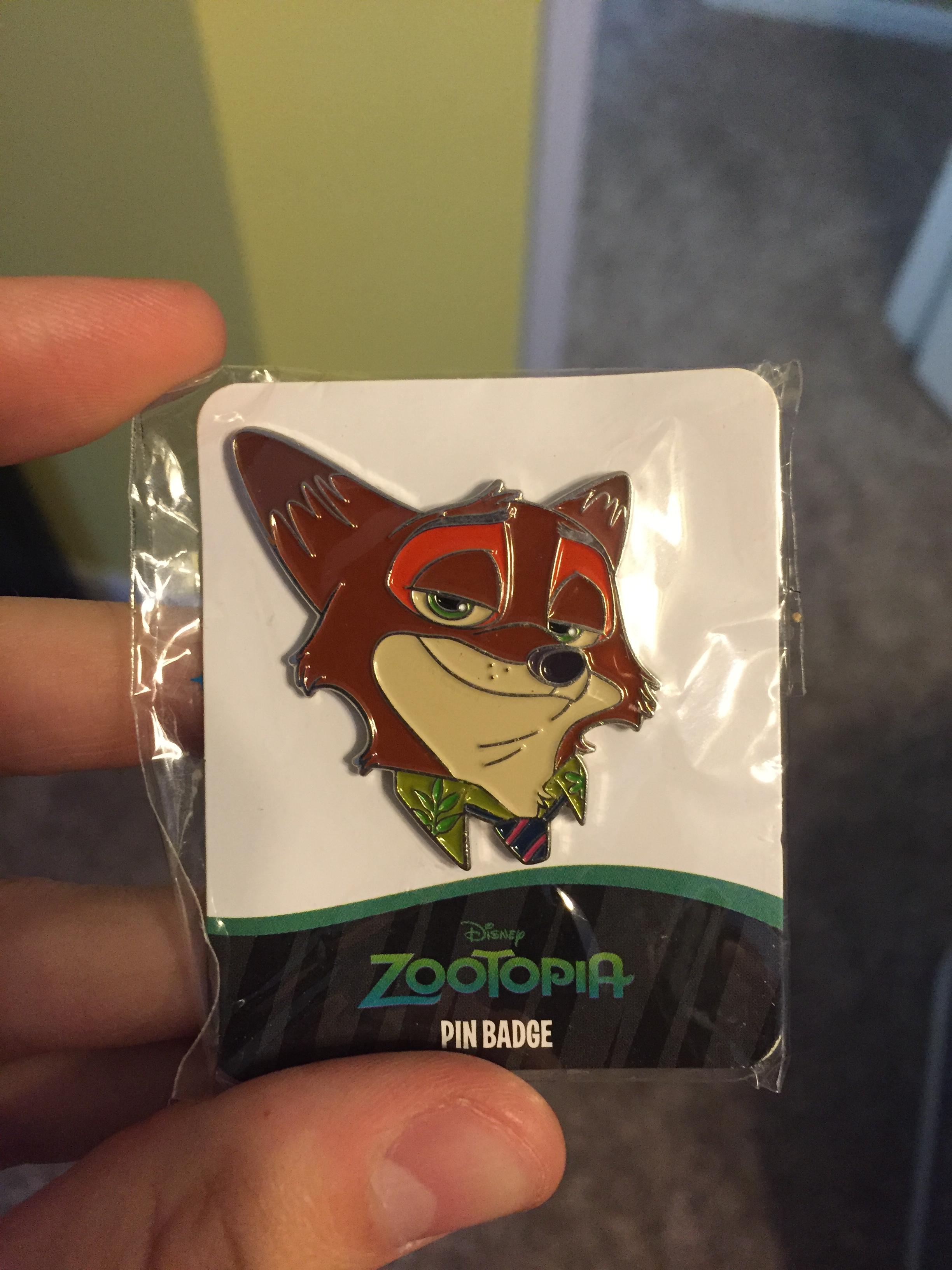 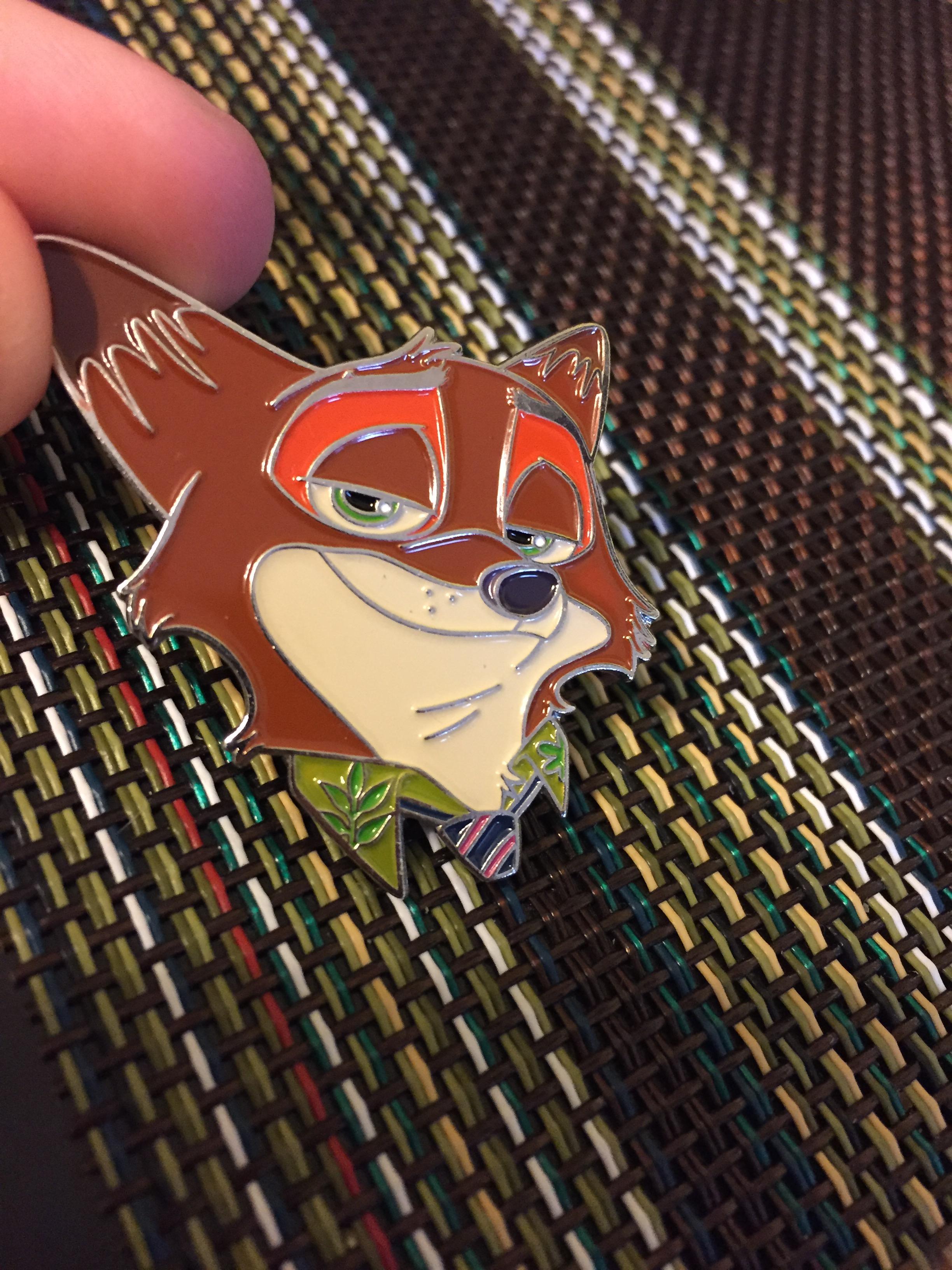 The pin comes in a simple packaging that seems to be unique to what I remember being sold in the Disney World parks. On the back of the packaging it stated it was a cast member pin (no picture since the first one was from August. Sorry!)
Material is the same as most other Disney pins. Metal with a glossy and smooth paint job. His outlines are not painted and are the reflect silver metal (including his eyebrows).
The back has a typical Disney pin stopper as well as a copyright from Disney and stating that it was made in China. It also comes with the code FAC-046694-15330 which I’m guessing is the serial number?
Overall the pin feels to be high quality when it comes down to the design, coloring and weight. It’s nothing too heavy, but you can tell it’s made with good material. I’m just happy I was able to receive one of these from my twin on our birthday back in August. Still have no idea where she actually found this.

Next, we have a Funko Mystery Mini of Nick. 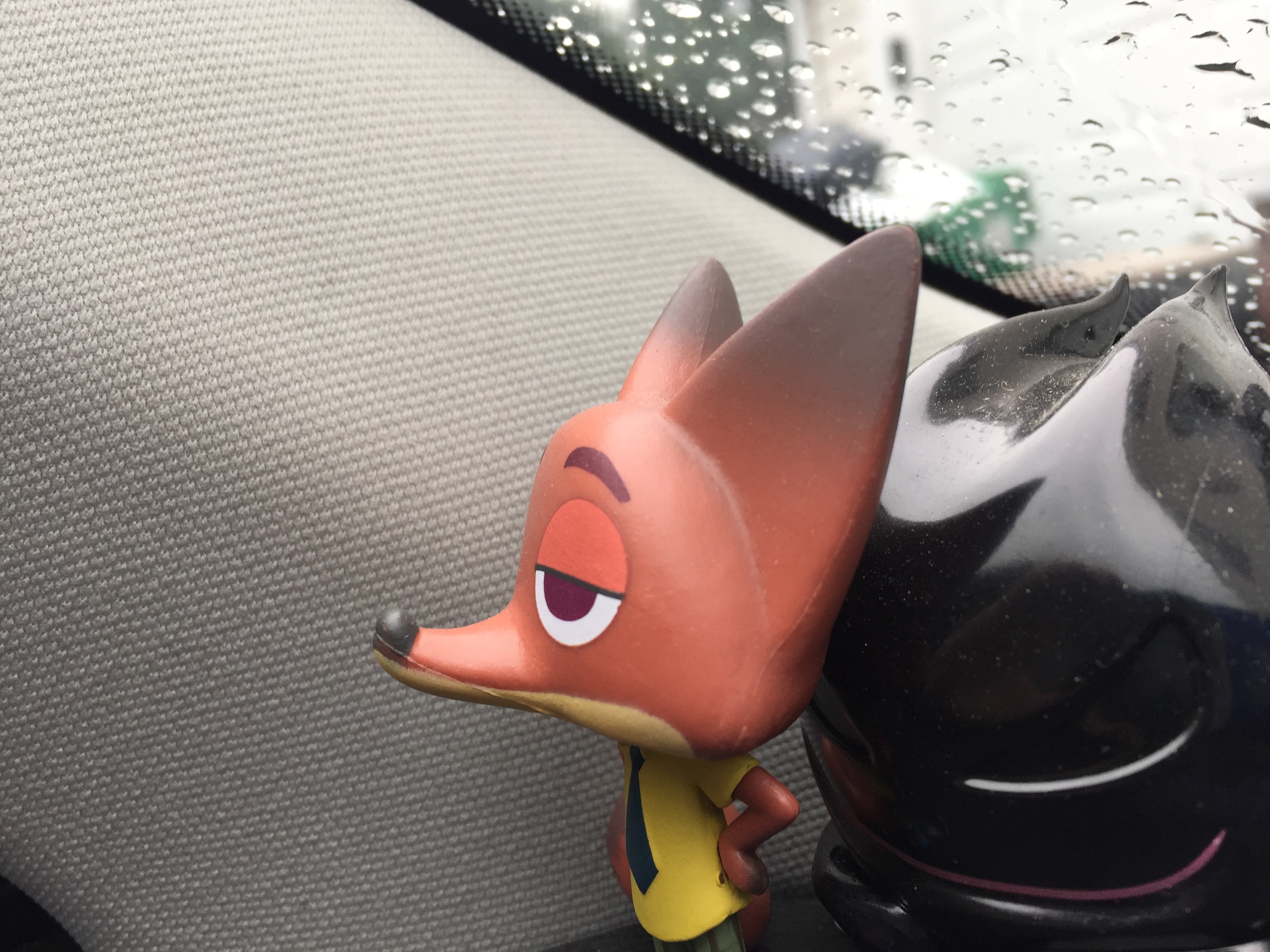 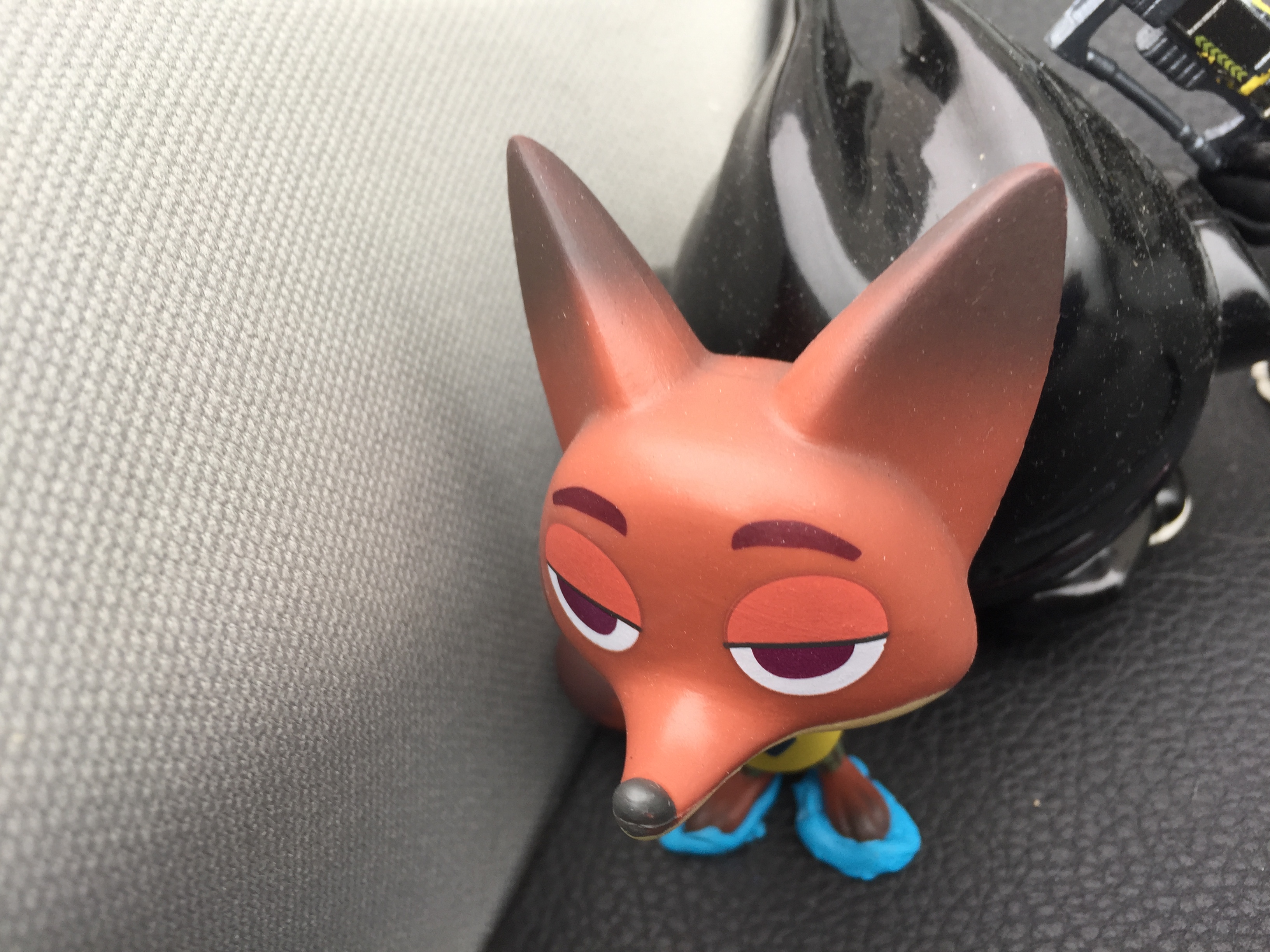 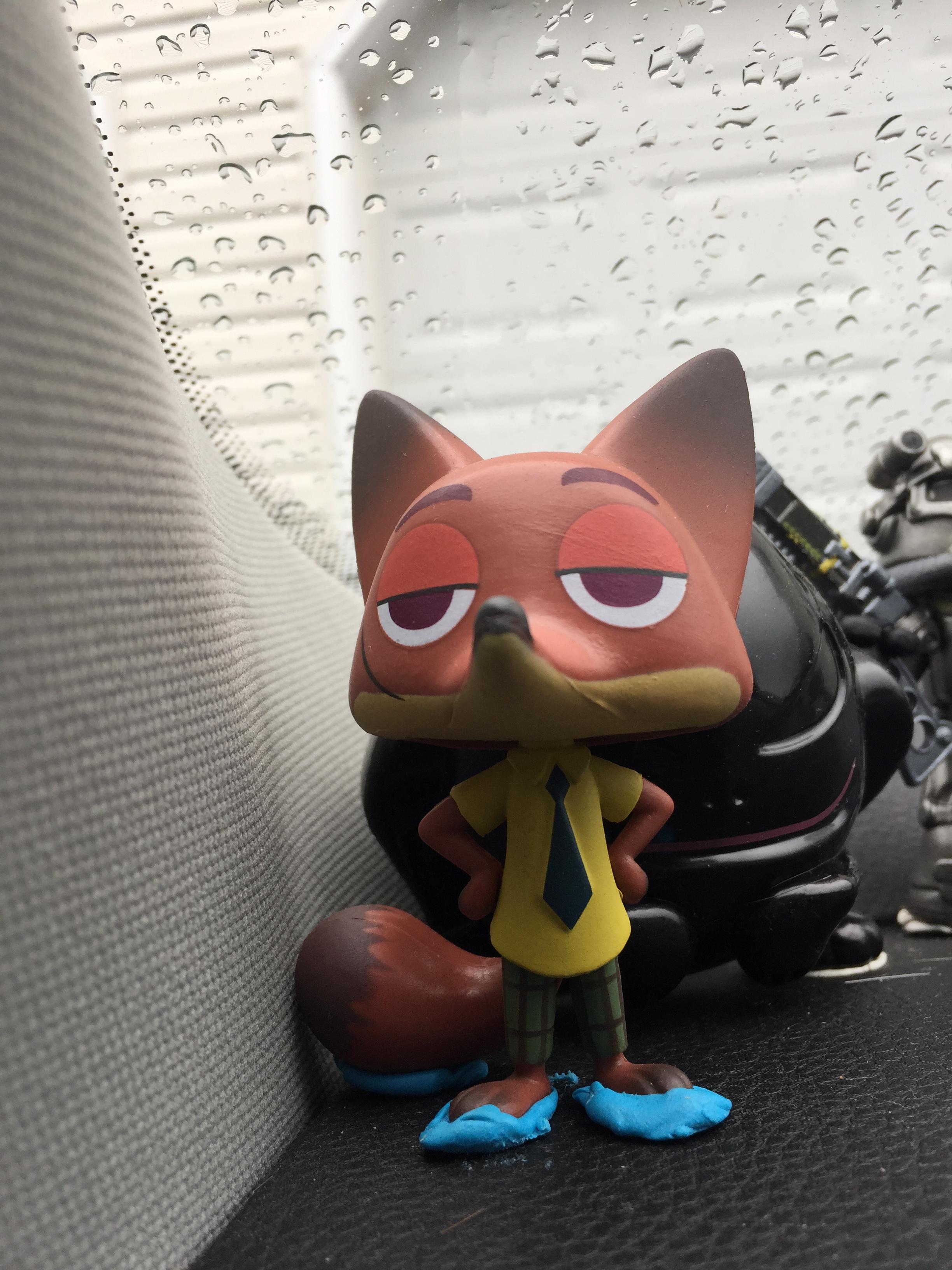 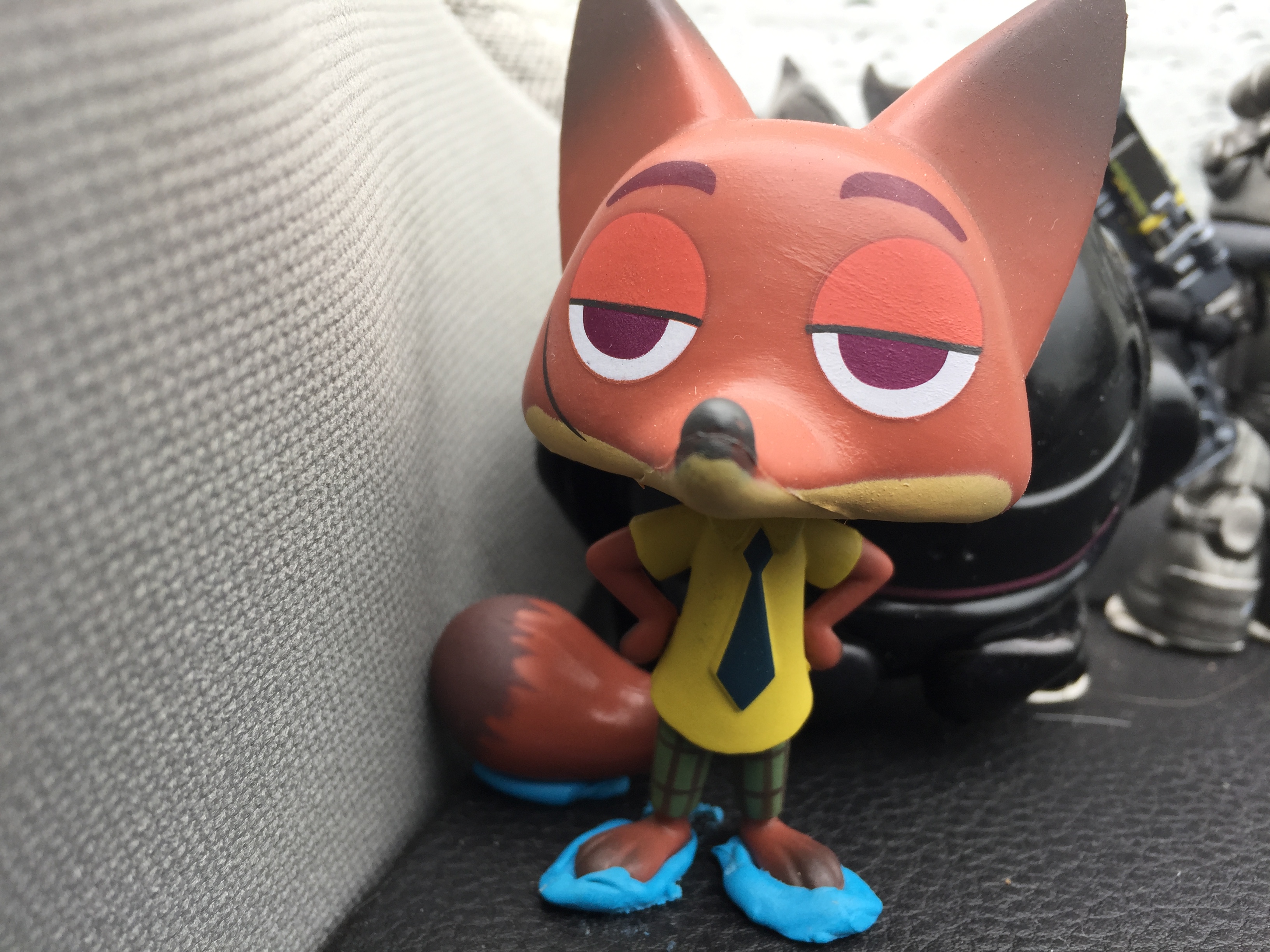 (I have him mounted to my dashboard with putty, in case you were wondering what the blue stuff was.  Took forever to get him to stay there, so I just left it as is.)

This figurine came out around April-July and was apart of a Mystery Mini collection along with Judy, Ele-Finnick, Bogo, and a few other notable characters! I acquired this figure after the Blu-Ray came out and he has been in my car since then. I used sticky adhesive to keep him in place along with my Volkswagen Fast and my BoS member.The quality of the plastic is what you would expect of a $7 toy, but surprisingly it doesn’t feel like his head will snap off when you get too close. It can turn and be angle however you want and allow you to pick a good pose for him.The most notable thing about him are the purple eyes and lack of design on his shirt and tie. The lack of design is surprising as his pants have stripes on them, so who knows why they went with this design. The eye color was something I thought I would hate at first, but it definitely grew on me. The more subtle and toned down color choice really does go well with his overall design.The art style for him is actually a favorite of mine. It’s cartoony and fun to look at and he really adds a nice touch to my otherwise more mature looking figures in my car. His smug grin livens up my collection as well.The one complaint I do have about this figurine is the ability to stand up. I’m not sure why but I had a very tough time getting him to stay up and ended up having to put adhesive on his tail as well. This Mystery Mini figurine is a great choice for collectors and fans alike. Want to add some flair to your car? Add Nick in there! Shelf or desk kinda drab? Nick can help!You can find these figurines online and on sites such as eBay and Amazon.