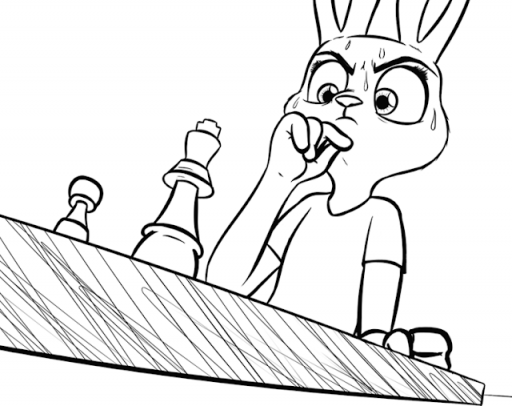 Sorry It’s been a late-update day.  I had several final exams today.  Gotta love those.

Fun fact- I’ve been working as a chess teacher for several months now.  That face Judy is making?  It’s a very, very common sight at my job.  You can almost see her mind trying to work out the different moves she can make, what possible moves her opponent might make, if making a certain move would help her or put her king in a precarious spot.

Here’s a tip- when going up against someone you know is better at chess than you, don’t let them take control of the game.  If they start a chain of captures, it’s better to just move pieces that are not involved in the chain at all.  You may lose some pieces, but it’ll inevitably throw off their strategy, which will often leave them open to attack from another angle.

If only Judy had taken my class.  Check out the comic over on Deviantart, or after the break!

[EDIT:  Apparently there was still one more page to go!  NOW it’s finished!]