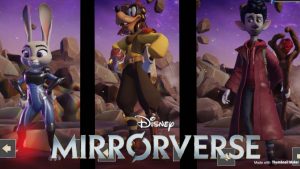 I’m sure that there are many gamers out there who will appreciate this bit of news. Disney and Kabam games have teamed up to put out a new mobile title called Disney Mirrorverse. While there isn’t much information on the main site, diligent Disney fans have dug up what information they can on the upcoming title, and it seems that Judy Hopps will be making the character roster!

While it is possible that Nick or other Zootopia characters may be included either at launch or in future updates, Judy is the only one confirmed for now. The Disney Wiki describes it as a role-playing game featuring Disney and Pixar characters. Sound like something you’d be interested? Worried it’ll just be another gacha game like so many other mobile free-to-plays? Guess we’ll find out more as things develop.

Check out the article over on the Disney Wiki for more details.