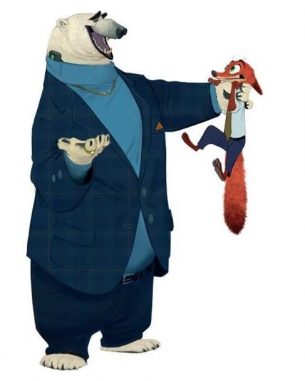 As great as Zootopia turned out to be, it’s easy to forget that there once was a completely different version of the story with its own distinct takes on the characters. Mr. Big certainly made for an intriguing mob boss, but I’ve often wondered what could’ve been if they had gone with Koslov as the boss like in the original script.

Well, good news for anybody else wondering that because Alexander Snow, one of the animators that worked on Zootpia, was kind enough to release a nice little animation reel featuring an indebted Nick trying to sweet talk the big bad polar bear himself with less than stellar results. I guess that silver tongue of yours can’t always get you out of trouble, eh Wilde?

It’s too bad we never got to see more of this take on Koslov, he seemed like a fun character. I know I certainly wouldn’t want to find myself in debt to the likes of him.