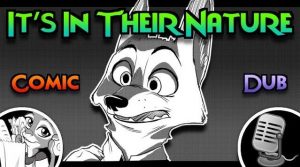 I find this very adorable! If you didn’t think Nick could be a great father figure, this can probably prove you wrong. I mean, it’s literally in their nature!

MickelPickel and CasVoiceActs are back at it again with another voice dub (Seriously, guys, you’re outdoing yourselves with these! Keep it up!), this time of RobertFiddler’s comic “It’s In Their Nature”.

Some people may think Nick wouldn’t be a great parent, but I highly disagree, and I have a feeling this video may prove you wrong. Even though he made such a mess, I think it’s very sweet that he can help take care of Judy’s niece!

Overall this comic dub was very adorable, and the voice-dubbing duo really outdid themselves with their voice acting, especially with Cas being little Cotton Hopps.

Check out the voice dub right after the break!