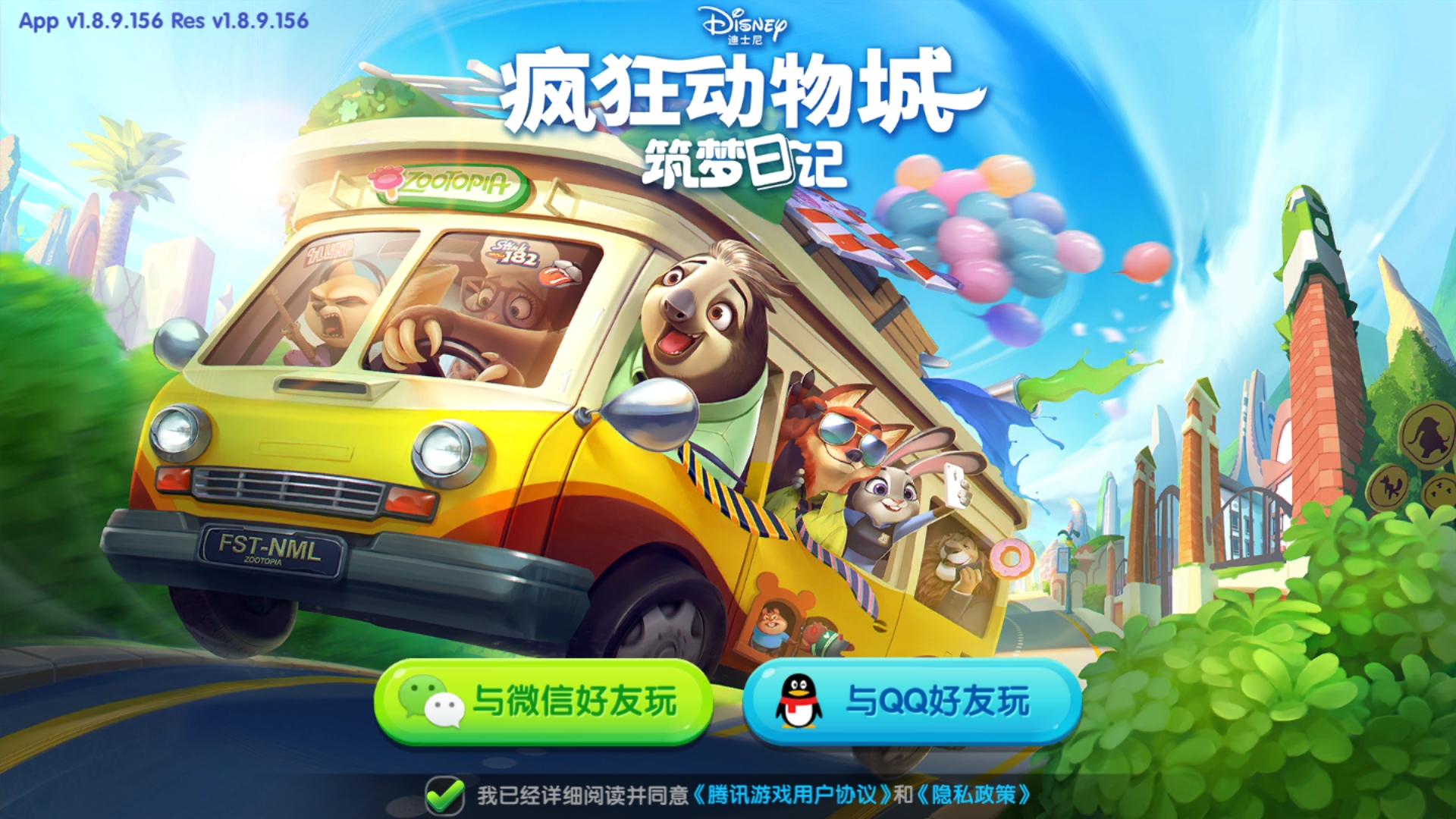 This article was written by the newest member of the ZNN Translation Team, Pudong.  Welcome to the team!
It is relatively well-known that Zootopia was a HUGE hit in China when it first released, grossing over 1.5 Billion RMB (around $200 Million USD) in that country alone.  However, not many zootopia fans are aware that Tencent (腾讯), a major internet service provider in China, has just released a new Zootopia-related video game in collaboration with Disney!  The cries of millions of fans have been answered!  Glorious Day!
Known as “Zootopia: Your Dream Diary” (the original Chinese name, “疯狂动物城：筑梦日记” literally means “Zootopia: The Diary of Realizing your Dreams”), this new game is a pleasant combination of the puzzle and simulation genres that are so popular on mobile devices.  Taking place after the events of the movie, many parts of Zootopia have now fallen into disarray, and it is up to the player and Judy Hopps to rebuild the city.  Boasting original animations and backgrounds, return with your favorite characters to Zootopia for a brand-new way to pass the time!
With a popular Chinese idol, Li Zixuan (李子璇)  as its spokeswoman, the game has received a very warm reception upon release, enjoying a rating of 4.8/5 on the official Apple App Store from a basis of 8,600 users.  In addition, a post to Weibo (a popular chinese social media platform) regarding the new game recieved over 110,000 “retweets”, testifying to the movie and game’s overwhelming popularity in China.
Unfortunately for most Zootopia fans, the game is only available in Chinese at the time of writing.  But don’t worry!  As a native Chinese speaker, I am here to teach you all how to download and enjoy this game!  After all, the more attention this game gets abroad, the better the chance of an international release!
Check out the official trailer, as well as detailed instructions on how to get and play this game for yourself, after the break!
How To Download

The best way to download “Zootopia: Your Dream Diary” is via the official Tencent Website (https://f.qq.com/main.html).  Although it is playable on PC, I personally recommend downloading it on your mobile phone, as it’s much easier to use.  Once you’re on that page, you can begin the download process by clicking or tapping the orange button in the middle. 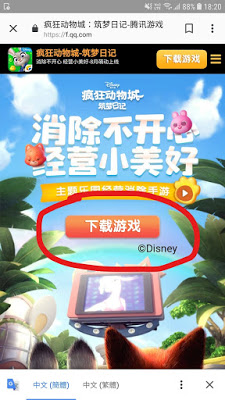 When the process begins, your phone will notify you that the game is downloading multiple files onto your device.  Click “Allow” to continue downloading.  Tencent is an internationally renowned company, and will NOT harm your electronic devices.  For other users, your phone might also warn you that the app is from an unknown source.  Considering that Tencent is a Chinese company, this is absolutely normal.  Simply change your phone settings to allow it to download apps from an unknown source, and the game should be ready in no time.

This screen should greet you when the download is complete: 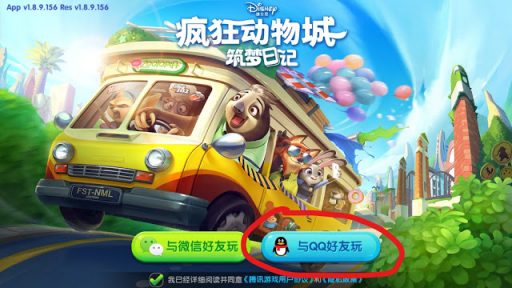 In order to play the game, your device must have either QQ or Weixin, both of which are popular Chinese communication apps.  They are intended to help find friends for you to connect with, much like how apps that sign in to Facebook do.  For convenience’ sake, I personally recommend you download QQ (highlighted by the red circle) as the process is much faster than the latter.  We tested this ourselves, and ZNN staff members were able to get on in 5 minutes or less.

Don’t forget to check the box at the bottom, too- it’s the obligatory “I agree to the terms and conditions”.

Once you request to download QQ, you should be redirected to a page that requires you to enter your telephone number.  For non-chinese users, you will have to switch your country/region code from China’s +86 to correspond to your location.  This can be done by tapping on the button, then searching for the numbers which match your country or region.  If you aren’t sure what your country or region code is, CountryCode.org is a very handy tool to help you out. 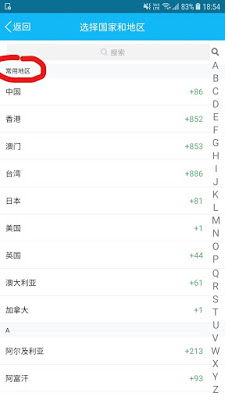 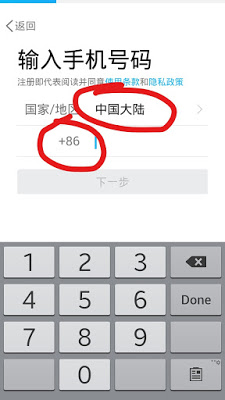 After you have entered your phone number, QQ will send you a text with a 6-digit security code.  Enter it on the app, and you’re good to go.  Keep in mind you’re on a 60 second timer, so if you miss it you can request a new code. 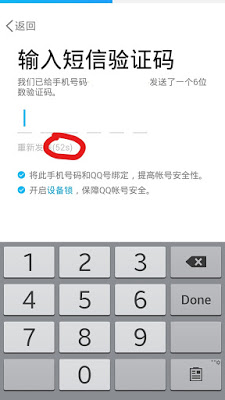 Once that’s done, you will be asked to enter a username.  Anything is fine, even xXwidehopps4evarXx (though I’m sure someone will take that simply because we put it here.  If that’s you, more power to ya).  Once you finish, you will be given an account number.  Save that or write it down somewhere, since that’s what you’ll need to search for friends on QQ. 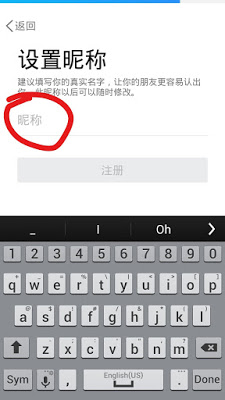 After all that is done, you should be redirected to another page.  You can ignore this, and start playing the game anytime you want.

How To Play
When you first open the game, you will be greeted by a short clip explaining the background of the game, with some original animation.  However, since it’s in Chinese, I understand if you want to skip it.  Just press the button I’ve highlighted in red. 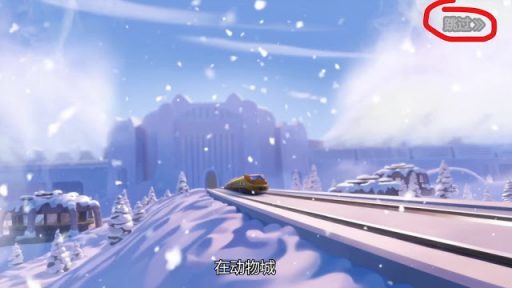 Story:
You are a designer/engineer tagging along with Judy and a new character, Robin Thompson.  Robin is an Otter who is the new rookie on the force, making Judy no longer the smallest mammal at the ZPD.  On the way to his dad’s shop, all three of you notice how rundown Zootopia has become since the events of the movie.  In an effort to make life better for the mammals of Zootopia, Judy decides to help redesign and rebuild some parts of the city and asks for your help. 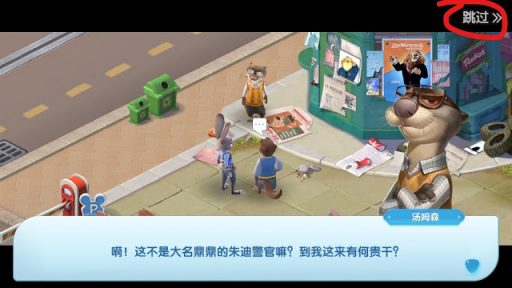 Looks smug, doesn’t he?  Mr. Thompson will then strike up conversation with Judy and Robin, mainly about the condition of the city.  Again, as it is totally in Chinese, feel free to skip ahead to the gameplay. 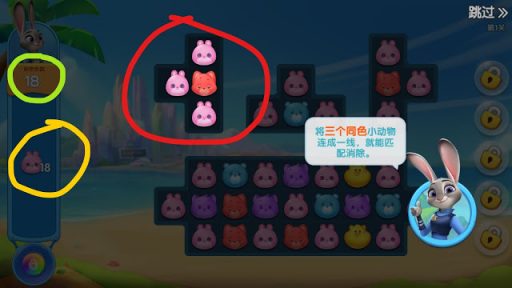 Our friendly bunny cop will soon lead us to start the tutorial.  This is where the puzzle element of the game comes into play.  In true Candy Crush style, players will need to line up three animal gummies of the same color in a straight line in order to collect them.  Throughout the tutorial, virtual paws will be there to guide you, so don’t worry about the language barrier here.
On the left, players can see the number of moves they have left in that round (highlighted by the green circle).  In the yellow circle are the remaining number of animal gummies you need to collect to pass the level. 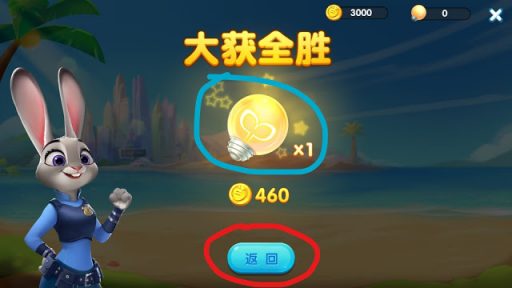 At the end of each round, you will gain a certain amount of coins in addition to an Inspiration Point (represented by the light bulb).  Inspiration points are needed to renovate specific parts of the city.  Return to Mr. Thompson’s store and tap on the button highlighted below. 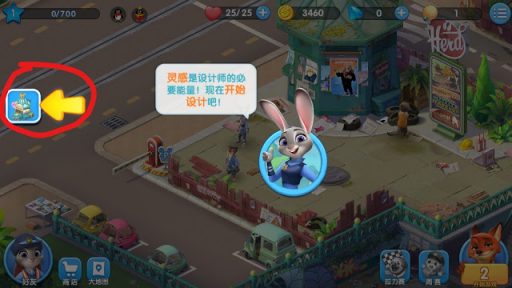 That button represents your current mission (i.e. the building you’re constructing or renovating at the time).  In this case, your first target is Mr. Thompson’s store, and you are free to choose one out of several new designs to build for the poor old otter.  If you wish to change the design later on, simply press and hold on the building you wish to alter. 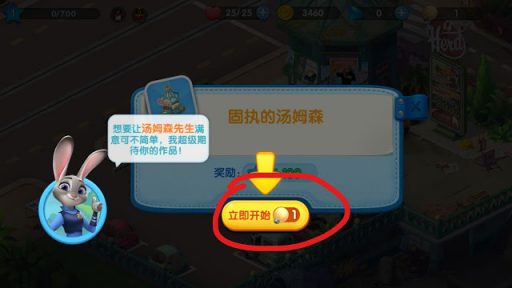 Once you begin the construction by clicking on the yellow button, you will be awarded various amounts of experience, which will be detailed by the box above the yellow button (though in the picture above it is blocked by the yellow arrow).  In the pictures below, you can see the total amount of XP you have earned in the top left corner.  When you have accumulated enough XP, you can upgrade to the next “prosperity level”. 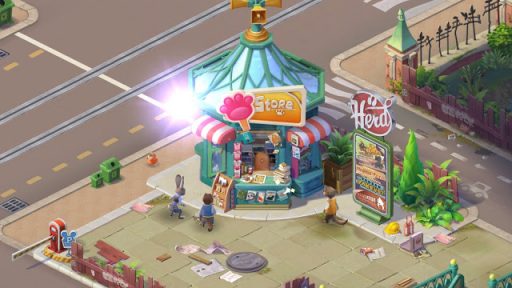 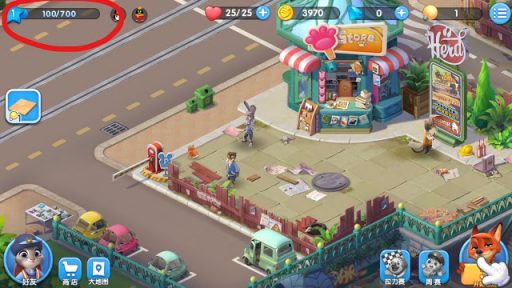 Enjoy your new store, Mr. Thompson!  To begin the next round, click on the button marked with Nick’s sly grin.  Meanwhile, the blue button on your left has been updated with your next objective.
There are a few more tools users have to acquaint themselves with to make gameplay easier.  Like before, virtual paws are there to show you around, so it’s relatively easy to understand.
1- The Boomerang: If you organize four animal gummies of the same color into a square, you will immediately be granted a Boomerang, which will allow you to collect all the gummies around it when you click on it. 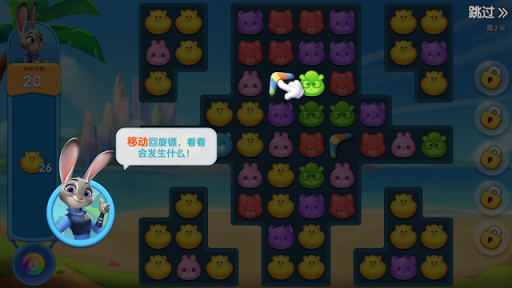 2- The Ice Cream Cone: If you manage to organize 4 animal gummies of the same color into a straight line, you will be granted an Ice Cream Cone.  It performs the same function as the Boomerang, but on a larger scale. 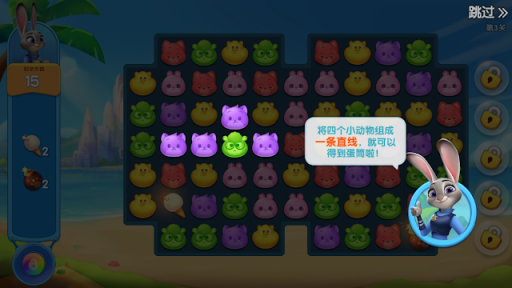 3- The Chocolate Bomb: Players will be offered a Chocolate Bomb if they organize the gummies into the same kind of an “L” shape, as seen below. 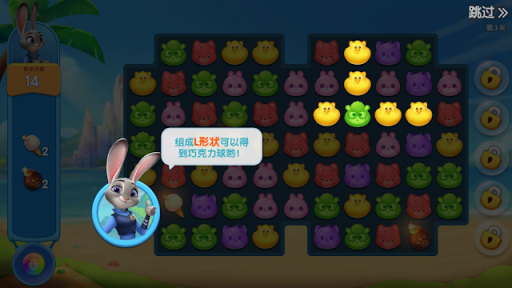 New Objectives:
As the game goes on, you will get new objectives.  Take the banana as an example.  By round 6, players will encounter animal gummies trapped in ice.  You have to organize them into a specific combination or use other tools to break the ice.  Once they are all freed, you will be granted a Banana, which is the goal in this scenario. 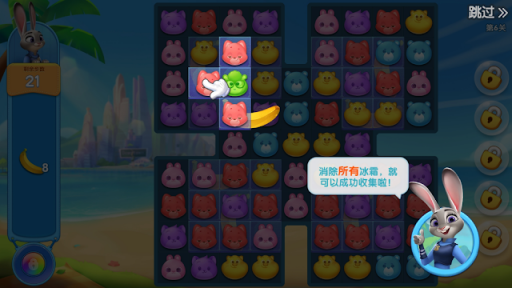 Players will also have to gather building resources, such as wooden planks.  By collecting animal gummies and forming tools, you will have to find ways to break wooden planks and other resources that litter the game board.
Conclusion
So… that’s about it!  Thank you for your patience, and I sincerely hope you enjoy the game.  Of course, I haven’t covered everything there is in the game, but hopefully it’s enough to get you started!  I assure you there will be fantastic new tools approaching as you reach higher rounds.  Full on tutorials will be offered through paw signs, like before, so I’m sure you’ll be able to handle the game just fine.
One last thing to note- This game is still a prototype, so there may be bugs or glitches.  If you find any, feel free to document and report them to ZNN at [email protected].  Once we’ve gotten your feedback, I will try to find a way to relay it back to either the Chinese community or Tencent itself.  Send us in screenshots of dialogue you encounter as well– if we get enough, we will try to do a follow-up article where we translate them for you.  Please be sure to mention the level you found them on, so we can piece them together easier.  Enjoy!