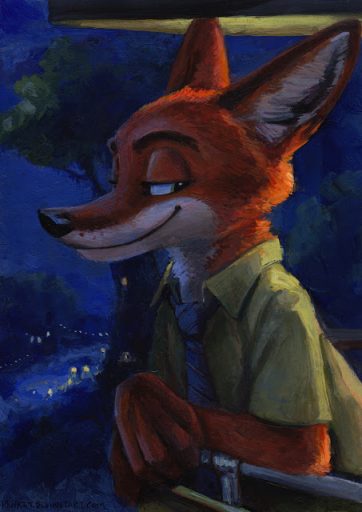 Greetings, ZNN readers. Welcome to the opening entry of my Ethics and Zootopia series. In these posts, I’ll be looking at some of the moral dimensions of the characters and situations in Zootopia. We get things underway by looking a little more closely at whether Nick Wilde was morally good at the end of the film. A lot of people seem to think the answer is yes, but I’m not so sure. Why? Read on to find out.
Let’s start with an obvious observation: it’s hard not to like Nick Wilde. Even when we first meet him and observe the duplicitous nature of his business practices, his charisma and wit compel us to downplay whatever moral reservations we may have about him. Moreover, he appears to have the proper permits for his activities, and his worldview seems more realistic than Judy’s naive optimism. Nick’s circumstances become even more understandable when we get some insight into how he was as a kid and how he was discouraged by others from trying to be an upstanding citizen. It’s easy to think that he’s a decent fox just trying to get by in a city that won’t cut him a break.

One of the most interesting discoveries from teaching Zootopia is that my students almost universally thought that Nick was, at his core, morally good. And to be fair, there’s definitely some evidence that could lead a person to this conclusion. The most obvious is that he plays a vital role in uncovering the conspiracy against predators, but he has some other virtuous moments tucked away in the film as well. In one instance, when he and Judy are fleeing from Manchas, he takes a moment to open the sky tram door and yells to Judy, “Get in.” In other words, he briefly halts his own escape on Judy’s behalf – behavior that seems indicative of a morally good disposition. And presumably, his decision to join the ZPD at the end of the film is at least in part motivated by a desire to make the city a little safer.

Now, most people will acknowledge that Nick isn’t morally perfect. His good deeds have to be weighed against the unethical things he has done in the past. It appears that when most people do this moral arithmetic, they conclude that Nick turns out to be a pretty decent person. But is that really true?
There are some reasons to be skeptical of this understanding of moral character. Aggregating good deeds and bad deeds reduces being a morally good person to a numbers game, and that doesn’t seem like the right move. To illustrate the problem, consider a well-known example from the popular video game Fallout 3. This game employs a karma system where performing a good deed (e.g., helping someone in need, defeating malicious people or creatures) earns you positive karma and where performing a bad deed (e.g., stealing, killing an innocent person) earns you negative karma. Your moral character is determined by how these deeds add up; a positive balance results in good character, and a negative balance results in bad character.

Early in Fallout 3, you can detonate a nuclear bomb located in a large settlement that results in the deaths of (at least) dozens of innocent people. As you might expect, you gain a massive amount of negative karma from engaging in such a heinous act. But here’s the catch: since the amount of negative karma you earn is finite, enough good deeds can totally erase whatever ill effects this has on your moral character. If you make enough donations to a local church or provide enough purified water to ailing settlers, then you can still have very good karma despite being a mass murderer. But this seems like precisely the wrong result: an act so evil doesn’t seem like the sort of thing that can be erased from one’s character – it taints a person’s character forever.

Of course, Nick hasn’t done anything so bad as nuking a town, and we’ve got to acknowledge that most moral mistakes shouldn’t be held against a person indefinitely. But there’s still a pretty strong case that his actions in the film are not by themselves sufficient to support the claim that he is morally good. Nick’s profession (if it can be called that) involves deception and duplicity. We also know that he’s had previous interactions with Mr. Big, one of the major crime bosses in Tundratown. Furthermore, since Nick boasts about knowing everyone in Zootopia, we can infer that he’s probably interacted with lots of other shady figures over the years as well.

By his own report to Judy, Nick has been involved in some brand of scheming since he was 12. This might be an exaggeration; Rich Moore stated that Nick went to high school (where he met Flash), so he may not have gotten too deep into his independent business ventures until graduating or dropping out. But regardless, let’s assume he’s been involved in this underhanded scamming for at least 15 years. That’s a lot of time spent developing character traits that aren’t so desirable, and they manifest pretty clearly in the first half of the film. Because of the role he plays in unveiling the conspiracy at the end of the film, it’s easy to forget that Nick spends roughly half his screen time trying to sabotage Judy’s investigation rather than aiding it. He also makes a point to denigrate her worldviews and break her spirit — and he even seems to enjoy doing so.

Now, we can readily grant that Nick has gone through some meaningful changes by the end of the film, but he’s spent almost his entire adult life up to that point acting rather unethically. Can one good deed – even a monumentally good one – really transform one’s character so fully?

I don’t think so. Character development is gradual, and it takes a long time to alter one’s habits and dispositions. It’s not like Fallout 3‘s karma system where your character changes instantaneously with a few good deeds. Becoming a good person in real life is not that easy. At the end of the film, we can conclude that Nick has shifted in the right direction, but concluding that he’s virtuous at that point is too hasty. Maybe after a sequel or two where we get further evidence of how his character has transformed, we can draw that more robust conclusion. But not yet.

Nick follows in the footsteps of characters like Han Solo and Jack Sparrow, who are widely liked by their respective audiences despite being tied to many unethical practices. Because these characters are so eminently likable, we have a tendency to downplay their morally questionable behaviors and overstate the importance of their heroic actions. If we resist this temptation and bracket those biases, we should recognize that these characters should be classified as morally ambiguous – that is, as existing in that gray area between heroes and villains – rather than being labeled as heroes.

Or so I argue, anyway. What do you think?