In a real life, animals evolved all sorts of abilities to give them an edge in live. Prey animals like rabbits tend to have good hearing and a wide field of vision to better detect predators.
In Zootopia, there is no longer any danger of being eaten, so what might those senses be used for now? Find out after the break!

Today we got two comics for you! The first one is by そうま (Souma) and the second comic is by 福 (Fuku). We combined them in a post because both of them show Judy’s abilities. Thank you very much Souma and Fuku for making them, thank you LMAbacus for translating them and gfcwfzkm for editing the second one! 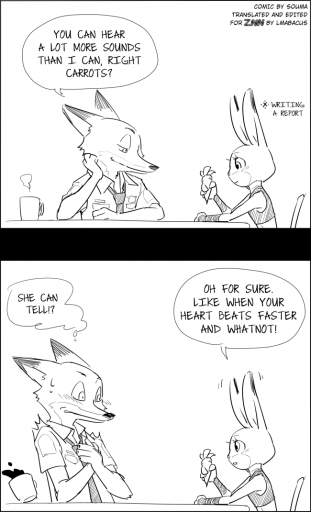