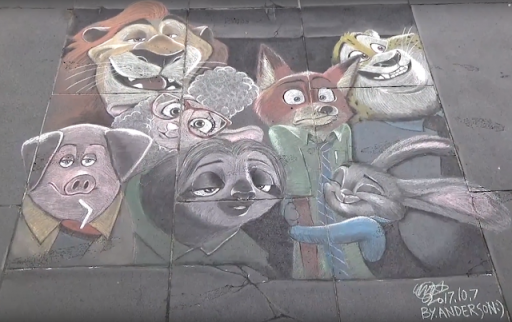 You know that scene in Mary Poppins, where Bert is drawing beautiful pictures on the sidewalk with chalk?  That’s one of many forms of Busking, or Street Performance.  They’re usually cool to see, and typically I’ll tip them a few dollars if their performance is really impressive.

Well, one such Busker in Melbourne, Australia, who goes by the name of Anderson, also has a youtube channel where they show off exactly how they go about making their art.  It’s very impressive to watch, especially considering it’s all done in chalk, so however many hours of work he put into it will be gone by the next day if there’s rain.

This guy’s youtube channel is criminally under-viewed for someone with this much talent and skill.  Go watch the video of him making some awesome Zootopia art after the break, and be sure to like and comment on it if you enjoyed it!