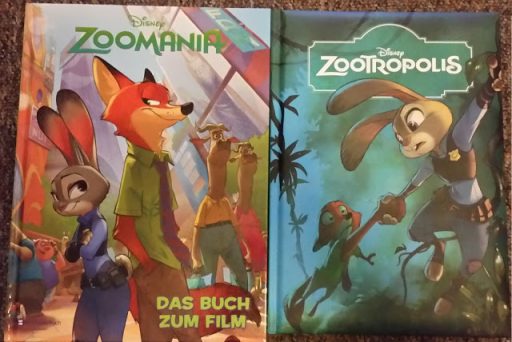 Hey there guys!  Surrika Tunnah here with another book review.   However, this review is going to be slightly different than the norm.

Folks who follow my reviews will know that I am British, so any books I buy locally will be known as Zootropolis; so when I came across a book to review, it was the British version.  However, thanks to someone close to me I was able to obtain Zoomania, the German version of the book!

What I found when I compared the two books was… quite surprising.

Find out more after the break!

The first book I’m reviewing, Zootropolis (as published by Parragon Books), will mainly be because I can read the language it’s in.  The book is a large hardcover retelling of the events of the movie accompanied with some lovely artwork on every page, as those who remember my magical story book review will be glad to know. There is more reading to be had on each page, although not a lot more, but at least it doesn’t dance around the conflict like the aforementioned book did.

I would say the complete story is in this book, but it isn’t.  While it does cover more ground than the Magical Story version, it also skips over some scenes entirely.  This wouldn’t bother me so much if I hadn’t got the German version of the book and made a surprising discovery.  But I will get a little bit more into that later.

The print quality is very good. The pages are nice to touch and have a glossy after-finish. The cover of Zootropolis is probably the most unique thing about this book though.  Most of the Zootopia re-tellings often have Judy with or without Nick standing amongst the city and it’s residents.  Parragon decided to go with the scene where Judy is swinging on a vine holding onto Nick. Although unique, this cover is a poor representation of what the story is about. 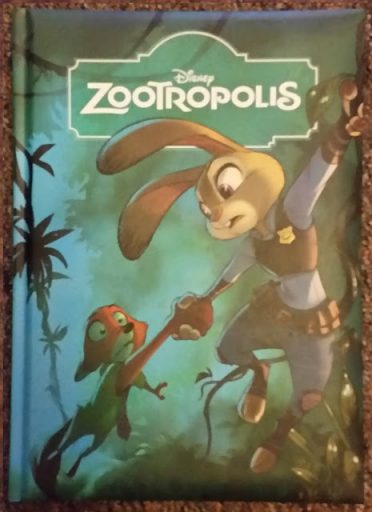 But there is one thing that this book has in common with my previously reviewed Zootopia: Magical Story- Mr.Big has, yet again, been completely removed from the retelling. They don’t mention him at all, or Fru Fru for that matter. They just skip the scenes entirely. Oh well, at least they fixed that blunder I spotted in one of the pages in Zootopia: Magical Story. 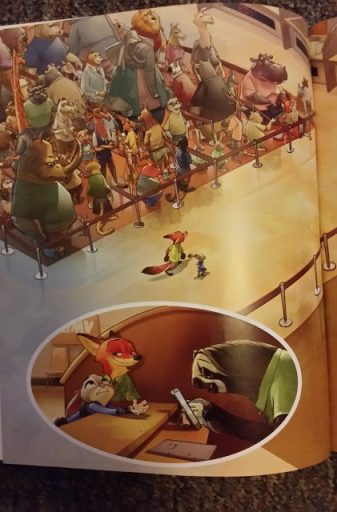 Good mammals, behind the rope!

Moving onto Zoomania, the German retelling of the story.  Obviously I will not be able to review some of this book because I can’t read German, but I don’t need to understand another language to realize that the British book got the short end of the stick.  Zoomania is a retelling of the tale of Zootopia (obviously) published by Schneiderbuch. Just glancing at the cover I can already tell this is going to be better. 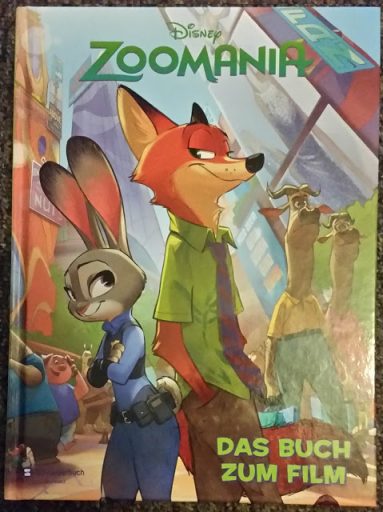 So is it better? Short answer? Yes. Long answer? Wow, Parragon publishing, you really, really dropped the ball. How do I know it’s better if I can’t read German you ask? Well instead of telling you. I can just show you.

For example, there are little details at the edge of the pages that describe the climate of the area as if it’s some kind of news documentation we’re following. Overall, Zoomania’s retelling just feels better. Makes me wish I could read German to see what the extra pages actually say.

Parts that the German retelling covers that the British version doesn’t:

You can buy any of these books on Amazon! (Zootropolis) (Zoomania) You can also find them in local book shops.

This has been Surrika, your Meerkat of Merch, Signing out!