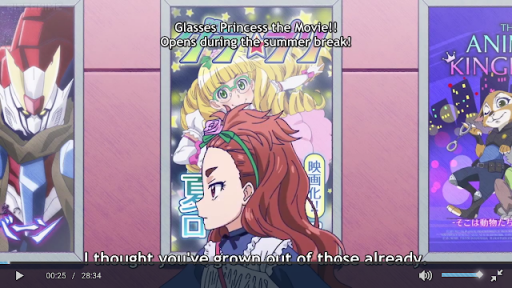 There’s an anime called Oshiete! Galko-Chan!, a.k.a Please Tell Me! Galko-Chan, adapted from a manga of the same name, with the release date of January 8th of 2016. The plot is about three teenage girls in their moments in high school and their interactions are humorous and often informative.

Check out the full story of the Zootopia cameo after the break!

In the OVA special aired on January 23rd, 2017, at the start of the episode we see a scene where a character walks near a few poster from a movie theater. From right to left, the first one is a clear reference to the popular GUNDAM series and the second is a Sailor Moon-like movie. Now, the third poster, it may only shows half of the poster in the shot, but we can identify a few familiar elements: In that movie poster, named “The Animal Kingdom”, we see a feline character with a pair of handcuffs (or in this case pawcuffs, I guess?) and wearing a police uniform almost identical from Judy Hopps. Alongside her, theres another mammal; there’s only a portion of him, but we can see he’s wearing a green shirt and beige pants, potentially referencing Nick Wilde; looking at the paws and feet, it appears to be a bunny (or a dog, because of the sitting position).

It’s too bad it is the only shot in the anime where we can see the reference – it takes 3 or 4 seconds of screentime – but…its a good reference, yo.

Check out the full image here!