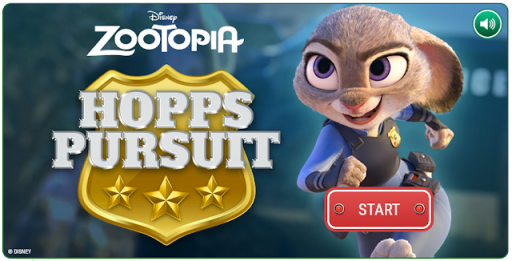 We’ve said for ages that Zootopia needed more games.  But little did we know, when Zootopia was originally released, Disney put out a little game for their games site, Disney LOL.  Why hasn’t anyone heard of this?

As a game… I’m not going to sugar coat it, it’s not very good.  It’s a Runner game where you play as Judy Hopps as she chases down Duke Weaselton.  Simple enough.  Jump over and slide under obstacles.  Super basic.  The trouble is Judy is very floaty and there often isn’t enough space between obstacles to tell if you’re supposed to jump over them, or land on them and then jump to the next one.

But don’t let my impressions of it stop you from experiencing it for yourself.

Play the game over at HoppsPursuit.com, and let us know what you think of it down in the comments!

P.S.  Disney, WE NEED MORE GAMES.  Partner with an acclaimed studio to do something story-driven like you like! (Telltale, perhaps?)  But seriously, the world of Zootopia is basically begging to be explored in a game.