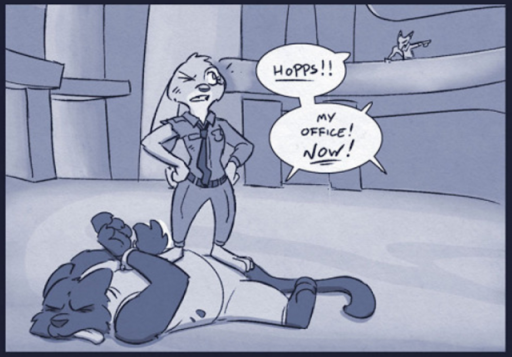 As I am sure many of you are aware, the comic artist Mister Mead has an ongoing series set 20-30 (ish) years in the future called Judy Is Dead.  I’m sure you can guess the premise of the story based on the title alone.  Starring one of Judy’s more distant relatives, July (pronounced Julie, I think) Hopps and Chief Wilde, it’s a very emotional story.  I plan on doing something to feature it soon, as it is an excellent series.

In the meantime, some fans of that comic have taken it upon themselves to do some voice acting for one of the comics in the series called “Pocket Change”.  As a voice actor myself, I have to say, it’s not bad.  Pretty good, even.  Good job, Dreemurr-Sympathizer and Periscully.  Ya did good!

You can find the original comic here, the dub here, and a combination of the two here.  Check it out!