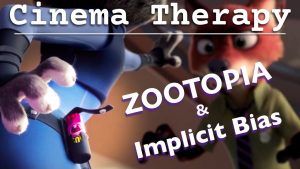 Reporter Pent Ghelsburg here for another in-depth look at Zootopia. This time we’re taking a look at how the film deals with the issue of implicit bias. We all know the film’s groundings in prejudice and related issues. But what other areas could possibly be looked at in the film?

Well, in a recent video put out by Cinema Therapy, two experts weigh in on how the film tackles implicit bias, exploring the issues surrounding both the psychology and anthropology of the film. What’s your take on the topic? Was there anything you think they missed? Give your own input in the comments below!