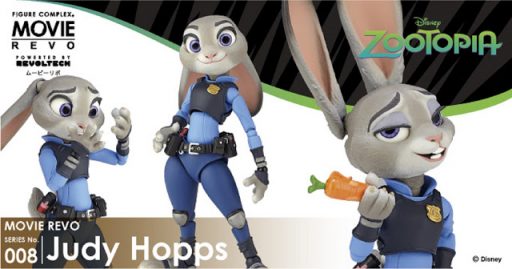 Hey, hey there fellow Zootopians! It’s Surrika, with another merchandise review! I have been waiting for this piece of merchandise since the moment it was teased and I even dropped a hint in my last review that this would be my next piece to take a long look at. Nice work if you picked up on that hint by the way! I am of course talking about the Revoltech Judy Hopps posable figure.

So let’s stop delaying and get into the review! See you after the break!

So, where do I start? Well let’s begin with what the box contains- the 4” Judy figure itself with 4 interchangeable face plates (making 5 in total because thankfully Judy already comes with a face attached)! There are also 3 interchangeable hands, making 5 in total, 2 open palms, 2 closed fists and a holding hand for the tiny carrot pen accessory it also comes with.  It also comes with a transparent hook-stand so you can keep her balance with the more top-heavy poses.  So far though, I have had no need for the stand as every pose I have put her in, she has managed just fine without it. 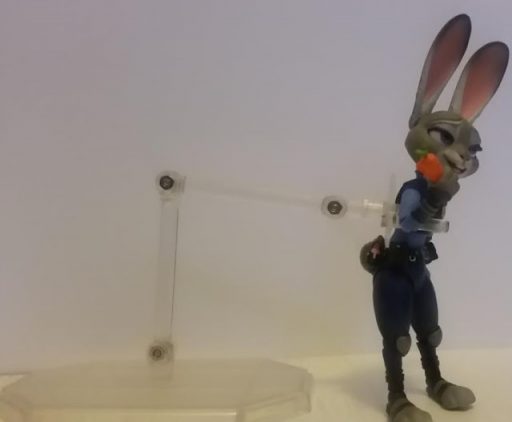 An example of using the hook

So now that the contents of the box has been put aside let’s take a closer look at the figure itself. Needless to say this is the most detailed Judy Hopps figure out there right now. I can also prove this to you because this is the only figure that has bothered to include a certain plot heavy item. I wonder if you know what item I referring too? Well here, I will even show you via a photo. 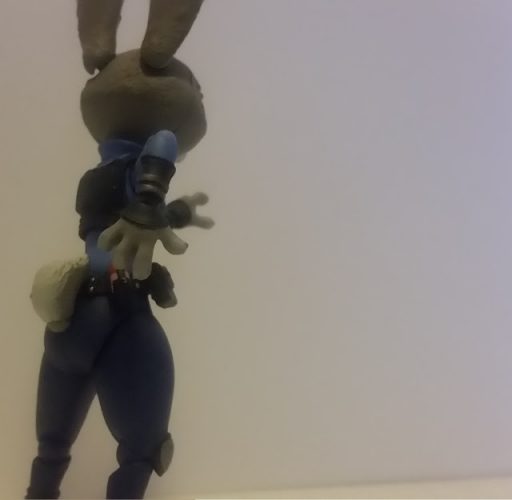 Nick’s already gone.
That’s correct! The fox-away spray. Surprisingly this was one of the first things I noticed about the figure, and you know my love of detail!

I had the goofiest grin on my face when I unboxed this figure and I immediately got to posing. Let me tell you I haven’t had this much fun with a figure in a long time. I felt like a kid again.  Ideas came rushing through my head and I immediately began testing the limitation of this figure’s posability! 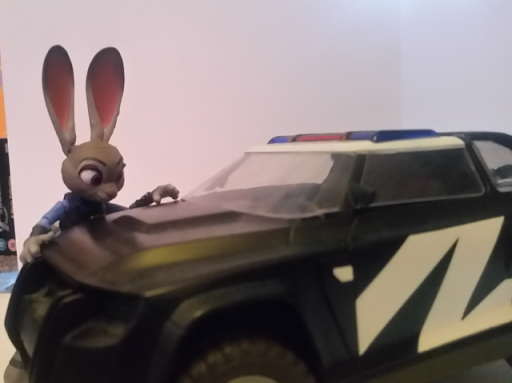 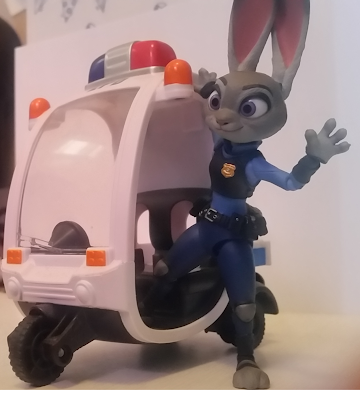 Trying to see what I can get away with pose wise!

You have all undoubtedly seen the silly pictures of people posing her eyes in very hilarious fashions. Giving her all kind of crazy-eyed expressions. This is because the eyes’ on each of the interchangeable faces have little knobs on the back, which you can use to adjust the eyes line of sight. Have her looking down, up, right, left or two locations at once for maximum silliness level.  The faces in question have 5 emotions which are smiling, grinning, shocked, worried or my personal favourite… maximum sass.

The many faces of Judy Hopps
The articulation of the figure itself is incredible.  The articulation points are the ears, neck, shoulder, elbow, wrist, waist, tail, thighs, knees and ankles. Yes, you heard me right- the ears are a point of articulation, meaning you can have her ears straight up or even “You are not fine,” ears droopy mode. As you saw from the image highlighting the fox-away spray, the articulation is so good you can even re-create poses from the movie.
The great thing about this figure is because it is so posable the only limit to the scenes you create with it is your imagination. I have done many poses and even went to my local sushi place with it to see what I could get away with in terms of scenarios I could put Judy in.  Had a few close calls of her almost falling in food with it, but here are 3 of the pics. You can find the rest here! 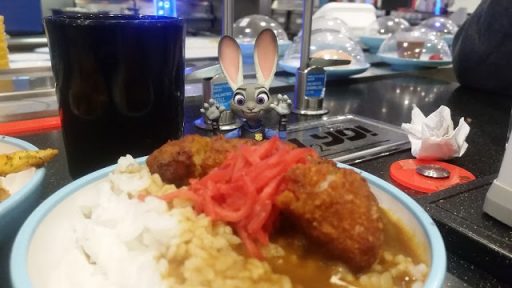 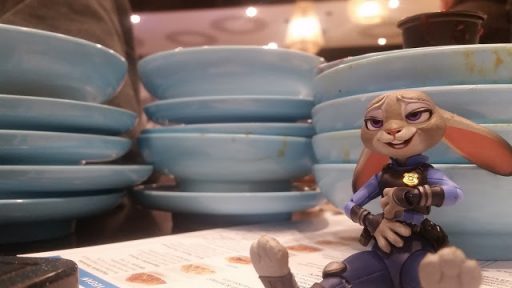 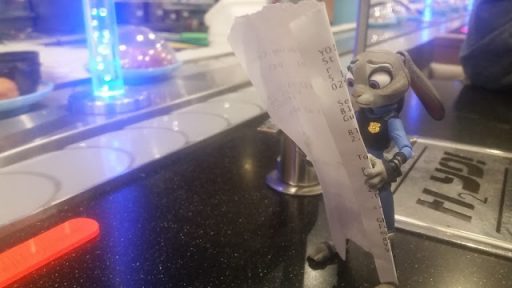 Needless to say this is so far the best piece of merchandise to come out of the Zootopia franchise ever. It was well worth the money and if you want to order one for yourself (If you call yourself a collector you NEED this) you can do so at Ami Ami. They are already taking pre-orders for the Nick Wilde figure and I simply cannot wait to give my little meerkat claws on that one! 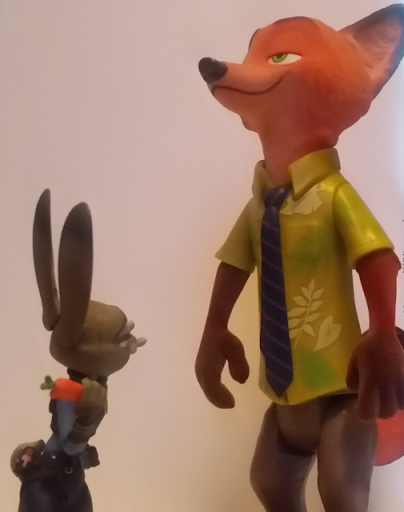 But I guess this Nick will do for now!

Wait, what’s that?  I haven’t said anything bad about the figure?  Well that’s because, on a technical level, there is nothing bad to say about it.  The biggest (or should I say smallest) gripe I’ve heard people say about the figure is it’s small size.  Well, that’s because it’s a posable figure.  Those are normally very small.  Plus, they are releasing a Nick one which I bet will be bigger so you can pose them like the film portrays!

I personally have had nothing but fun with this figure from the moment it touched my paws.

This has been Surrika, your meerkat of merch! See you all at the next review!