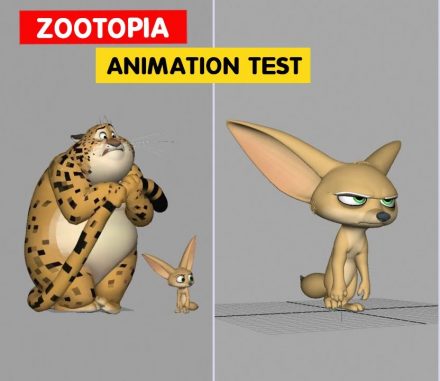 Lights…camera…action! The old standby that has become so synonymous with filming is certainly a phrase we all know well. But it’s not quite as simple when it comes to animated movies. From stop-motion action to CGI and everything in between, creating an animated scene isn’t as straightforward as simply pointing a camera at actors and yelling action.

Naturally, different art and animation styles lead to a wide variety of different processes. Hyrum Osmond has never been one to shy away from sharing that process with us. Heck, we’ve written our fair share of past articles about some of the Zootopia animations tests he’s shared before. In one of his recent posts on Twitter, Mr. Osmond was once again kind enough to show off the process that went into animating a deleted scene, this time featuring Finnick and Clawhauser!

Can’t help but wonder if they wound up in some zany situation without any clothes on or if the clothes just hadn’t been included yet. Guess we can’t say for sure without knowing what was actually going on in the scene. Why not check out the animation in the post below or over on Twitter and speculate for yourselves? Maybe even Let us know what you think.

Pretty sure this was the first Clawhauser test done for the show. Really early on when we were still exploring the style of the film. I decided to animate it big and see have far I could push before it breaks. Some sloppy posing in here but I love the energy. #disney #zootopia pic.twitter.com/jsfNhCo7NZ