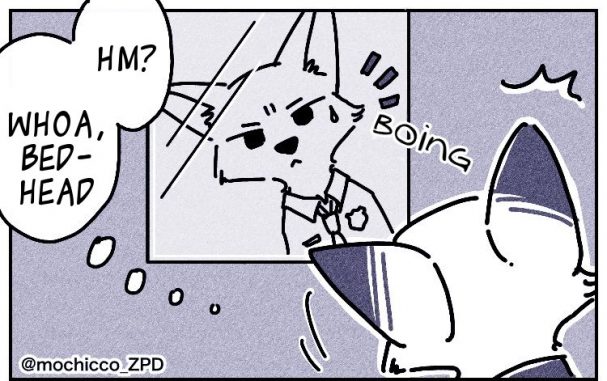 Morning, it’s a time of day that many don’t relish. We can’t all be morning people and those of us who aren’t often lag behind. Even for those of us who like the mornings, there are still days where nothing goes as planned. Bedhead, for example, is one such inevitably of life. It’s already a pain, but just imagine how much bigger of a problem it would be if we had as much fur as the denizens of Zootopia? Oh, the horror that would come with having to make sure that mess was properly brushed and maintained!

Mochicco tackles this issue in a recent comic translated by Translation Bear. Turns out when Nick doesn’t maintain his fur properly, it can lead to some rather awkward situations at the ZPD. Especially when a certain bunny gets involved. Check out the comic for yourself below or over on Twitter.