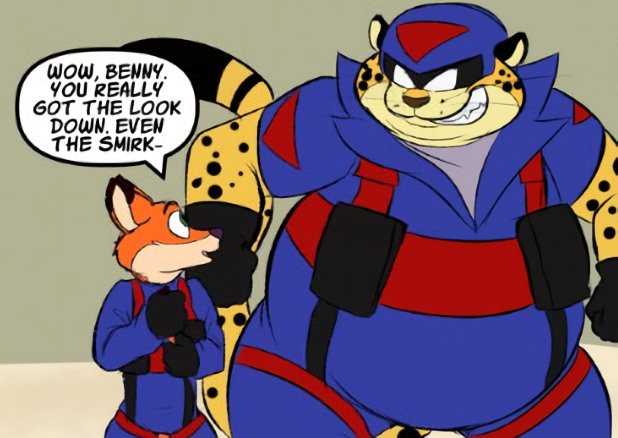 Crossover time!
Odds are anyone reading this probably has some inkling about Swat Kats: The Radical Squadron. It was a criminally underappreciated show that started in 1993, from Hanna-Barbera for Turner. It was pure ’90s… all the descriptors are negative but it was pure ’90s anyhow. Nostalgia needs better descriptors. It was action animation done right, and fully anthropomorphic, just like our beloved Zootopia, albeit with a much reduced species count. But even if only “Kats” (as they were internally called, hence the title) were sapient, it still held that feel. It’s not a perfect fit, but a good one nonetheless.
So we arrive here, a one-page comic that really gets the feel of both. “Swat Kats: The Radical(ly Changed) Squadron, by Puca-Puca from an idea by BigLovingWolf. Traditional drawing, technically. I don’t care if you’re sketching on a piece of Bristol or a Wacom, if you aren’t manipulating polygons or pulling splines on mesh, it’s traditional to me. It’s a great merging, a sort of midpoint between Zootopian traditional interpretations and the Swat Kats ;90s intense style.
We have Nick and Clawhauser on a day off indulging in some fun, cosplaying T-Bone and Razor, the Rubenesque Clawhauser appropriately as the solid T-Bone and agile Nick as the comparatively leaner Razor. In all probability, internally, Swat Kats would be a defunct cartoon series in Zootopia, but surely fans endure. Now, the turn of the comic comes from the helmets. There’s a little twist that will make the cosplaying so much more fun for all concerned.
It’s a well-rendered bit of art that merges favorite characters with the trappings of another series and the fit is magnificent. Give it a look.
~Gabriel LaVedier