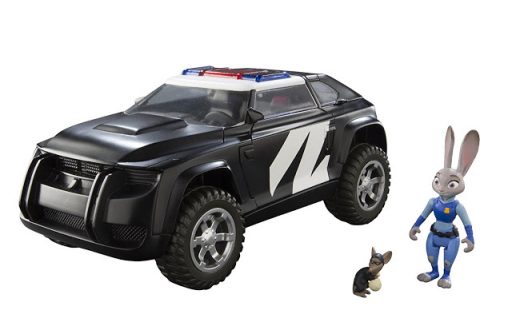 Happy holidays fellow Zootopians! It’s Surrika, the Meerkat of Merch, coming at you with another review just in time for Christmas!  But this time, things are going to be a little different. You see for the most part my reviews have been mostly positive, with the exception of The Magical Story book review (which you can read here).

This time, I am going to be reviewing one of the cheapest and tackiest pieces of merch that I think ever hit the shelves. No, I am not talking about Nick’s mysterious red convertible (yet).  I am instead going to be talking about the electronic ZPD Cruiser.

Find out more after the break! 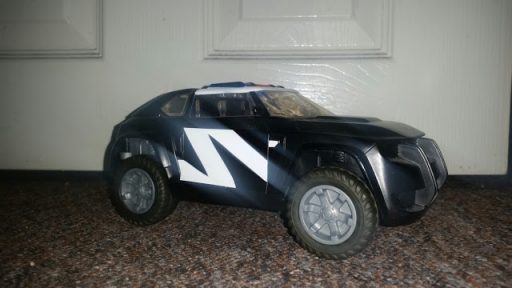 Now unlike Nick’s aforementioned mysterious red convertible, The ZPD Cruiser actually appears in the film- and this is where the mistakes begin. Meerkats like me have an eye for detail, and love it when small details are remembered.  For example, the Junior Ranger Nick having every emblem and even his pack number on his uniform (You can find a full review of the little scamp here!). But when you give Meerkats and other merch lovers like me these options to compare, we start to see how cheap some of these toys were made, and how many corners were cut just so they could make a huge batch and ship them last minute.

And oh boy, did they cut a lot of corners with this toy.  Or better yet… let me show you with a handy dandy side by side comparison!

Now the most glaring details that are missing are the decals, such as the word “police” near the back and front, and the cruiser’s number on the front.  Lots of colour detail that was missing (that could of be easily fixed by either coloured plastic or even just a sticker sheet so you could put the signals and lights on the cruiser).  The big strip along the bottom of the window is black instead of white. Many many minor details. The only things they got right was the zebra stripes on the door and the shape of the sirens.

Now speaking of the Sirens. This toy’s selling point is when you turn it on and roll it along the surface the lights of the sirens will start flashing. The speed of the flashing also corresponds with how fast you are rolling it along the surface.  Now you might think ‘Hey that’s pretty cool’ at first, but what I thought was ‘Why not put a small sound-chip inside it so it also makes the sound of sirens?’.  I mean, it wouldn’t even need to be that high quality of a chip just one that makes a siren sound. Also the sirens themselves do not flash. Interchanging LED’s at the front of the cruiser flash blue and red, so the box technically lies. 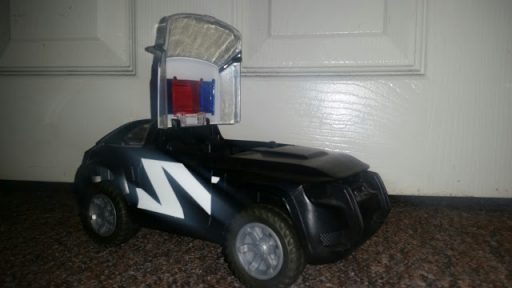 Now, onto the last two things about this cruiser touts as “features”.  How you put the tiny figures it comes with inside? I opted to turn them into keyrings rather than have them touch this thing, but the roof of the cruiser can be lifted so you can stick Nick and/or Judy inside.

The last thing and quite possibly the only thing nice I will have to say about the cruiser is that the boot can be lifted and raised to reveal a Holding cage that you can stick another smaller figure inside. The cruiser comes with a little rodent burglar to stick inside the cage. All in all the last bit I thought was a very nice touch…It’s just too bad that it’s sullied by almost everything else. 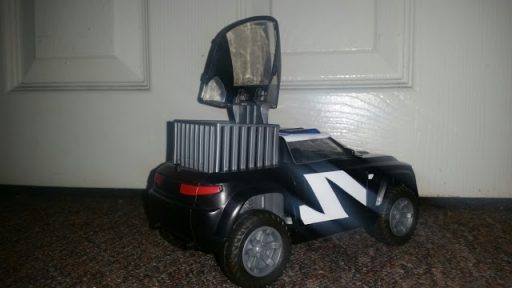 This is really all I have to say about this particular piece of merch. All in all it’s a cheap tacky toy that is overall disappointing, and really shows how unprepared Disney was for Zootopia’s unexpected success. Oh well.  Perhaps the next piece of merch I review won’t be as REVOLTing as this one was.

If you wish to buy this toy you can check it out via this Amazon Link!

This has been Surrika, your friendly neighbourhood Meerkat!  See you next time!