“Welcome to the Writer’s Corner! Today, we’re going to talk about dialogue: what makes for a good one, some traps to avoid, and a few examples to show you some of the different ways you can build your world through conversation.” 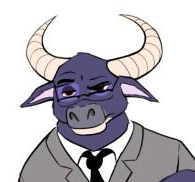 “The note here said ‘another nota line’ so, um, what he said.”
You can all get to the real dialogue piece of the article after the break!

The exchange is handled quickly and fits the scene he has created. It’s playful and captures the characters’ spirits. He lets the elements of good dialogue take over when he writes, as he explains:

Knowing the characters is key to writing dialogue between them. You have to really get inside their heads and think about how they would react to whatever situation you’re presenting to them, which may take practice and multiple movie viewings. I often find that starting the dialogue is the hardest part, because then the characters just take over and do the talking while the author acts as more of a mediator that guides the conversation. I would recommend having a bullet list of topics you want them to cover, but don’t be surprised if they decide to veer the conversation into another direction entirely. Characters can be finicky like that.

We’ll also show you a few examples from our own works: Euphonemes with “Run” and nota999 with “The Campaign.” They both deal with an election for mayor of Zootopia, but the dialogue that’s used in each of our stories is different.

Euphonemes: In my story “Run,” I tend to incorporate elements of the scenery into dialogue. I set descriptive text around the conversation and use that to help tell the whole story. In this example, Nick and Judy are in the car, talking about his feelings on Judy’s opponent in the race for mayor of Zootopia:

But in this car, she only wanted to know one thing. “I wish you’d tell me what’s bothering you about Lobos…but you won’t. Right?”
The stoplight had been red for fifteen seconds, which probably felt like an eternity to Nick. While they waited, he busied himself with the window controls. The wind had picked up, and so a loud whoosh accompanied the lowering window. Air currents tousled the fur behind Nick’s ear; it was messy, but somehow appropriate for the fox. He lowered and rolled up the window twice more before the light changed and he answered his partner. “It’s that important to you?”
“Nick. I know it’s important to you. So it’s important to me.”
The engine purred. The drag of acceleration was easing off of Judy’s chest. Nick sighed. “Okay. Fine. You see, it’s just that — oops! Our turn!”
A fast paw stopped Judy’s face from meeting the window.
Nick couldn’t quit laughing as they rolled onto a nicely maintained side street; Judy ended up snagging the wheel for two blocks before he recovered. “Sorry there, Fluff. Just couldn’t help it.”
Strangely, some part of her believed that. She wore her grouchiest grimace as she relinquished the wheel. “You are…mean.”

“You’re probably right.” His smirk was strong as his paws glided across the steering wheel. “But really, don’t worry about Lobos. Pretty soon, you’ll be booting him right outta that fancy chair of his.”
Euphonemes: I also use dialogue in larger speech formats. Because Judy is running for mayor in “Run,” campaign speeches are an important way for her to communicate. I still use descriptive text to break it up into chunks and prevent a wall of dialogue from forming, but usually, these conversation pieces run on a bit longer. In this segment, Judy is speaking in front of an audience in a university auditorium, as well as being televised:

“My fellow Zootopians,” an effervescent Judy began, “thank you all for being here this evening.” After she showered more gratitude on the university for the use of this facility, to Mr. Moosebridge and his network, and so on, she let more applause recede before getting to the heart of the matter.
“It has been a difficult few days, not only for me but also for our city. We have seen what can happen to mammals who lose their way in Zootopia, who are left to fend for themselves. And I have seen how tough it can be to bring those mammals back. It’s one thing to stand before you and talk about creating opportunity…but it’s another to witness why having opportunity is so important to our city’s future.”
Judy wasn’t sure what to plan for after that line; Nick had offered a few suggestions in his notes, ranging from total silence to raucous booing. It ended up being something in the middle: Soft applause rang out from the crowd — not patronizing or polite, but a sincere sound of mammals listening and appreciating her words. It was moving, and it brought forth the tiniest of smiles.
“A lot of us, I believe, take those opportunities presented to us for granted. Most of us don’t mean to — it’s just all we’ve known, and we can’t imagine it any other way. But, standing in that alleyway, I realized how much we don’t know about each other, how much we do not understand the trials of others, and the tough decisions our fellow mammals make. Especially those who struggle to keep food on their tables and roofs over their heads. For many in our city, opportunity is a distant dream.”

nota: Some would describe my style of writing as sparse. I prefer pithy. I treat my characters as actors, in part due to my background in theatre, and trust the imagination of my readers to assign the proper actions to them. Thus I rely on my dialogue to set the tone and pace of a scene. For example, this scene between my candidate for mayor, Todd Renard, and a prospective voter:
The door opened. A donkey the clipboard identified as Murad Himar stood half-dressed, arms crossed and his slippered foot tapping.

“I’m not interested in whatever it is you’re selling, fox,” the last word sounded like a slur coming out of the donkey’s mouth.

“Well I’m not actually selling anything, sir,” Todd said, holding a leaflet toward Murad. “I’m running for mayor. My name is Todd Renard.”

Murad rolled his eyes. “A fox running for mayor? Who do you think you’re fooling?”

Todd’s ear twitched as he kept a professional smile plastered to his face. “Fooling, sir? I’m afraid I don’t understand.”

“Don’t you try your sly double-talk with me, fox.”

“Sir, if you don’t think I’m trustworthy, I can tell you that I have extensive experience defending animal rights in–”
Murad produced a canister of fox repellent from beside the door. “You have until the count of five to be gone.”

“Fine. I’m gone,” Todd turned his back. The door slammed behind him. For a moment he was frozen, his mind clouded by emotions: anger at the interaction, fear for what it meant for the campaign to come, but most importantly the same defiance that allowed him to keep his idealism in a world determined to quash it. He looked down at the clipboard, marked Murad as “highly unlikely support”, and moved on.

nota: I also like to think of myself as a capable speechwriter, but I don’t think adding one of my speeches here will add anything that you didn’t get from Euphonemes’ example.
Now that we’ve covered dialogue, go out and try it yourself! Practice is important, so always keep working on it and sharing your dialogue with others.